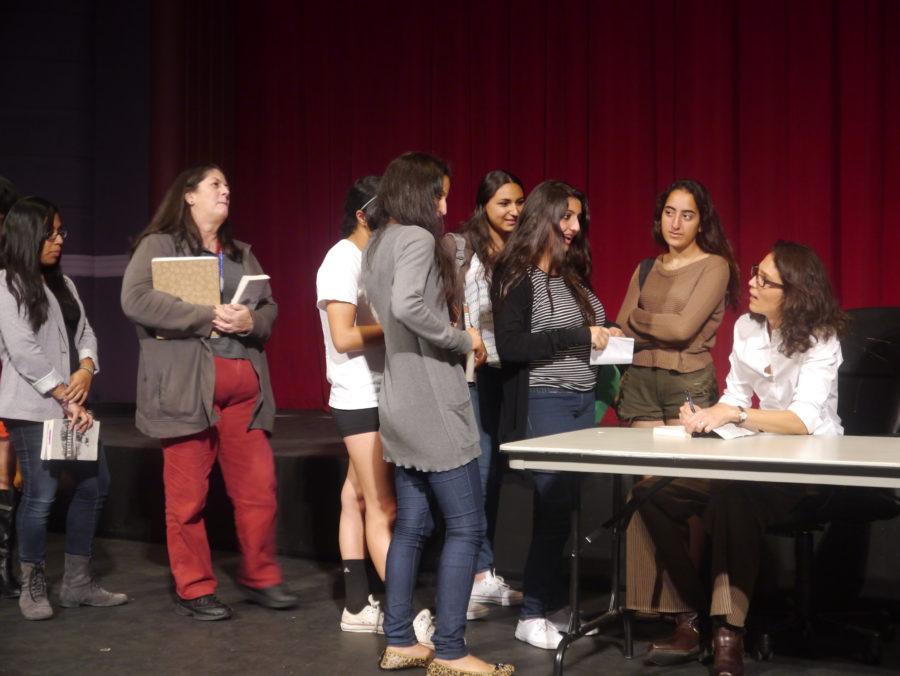 Parmis Sahrapima, Web Co-Editor-in-Chief
On June 5, the Hero Project featuring Nina Revoyr, the author of “Wingshooters,” was held in the Peters Auditorium. The hour-long session brought great excitement to students from both regular and honors English classes, as well as parents and staff members. The event also served as a great opportunity for those who were interested in learning more about Revoyr herself as a person, the personal connections that she created with her book, and the smallest mysteries that “Wingshooters” presented to its readers.

Being a biracial girl born in Japan to a Japanese mother and white American father, Revoyr truly succeeded in attracting her fans and audience by connecting “Wingshooters” to her own personal life. Revoyr expressed that many of the troubles that Michelle (Mike) faced, such as being bullied by her classmates, were also troubles that Revoyr experienced herself as a child.
“My own background and childhood was pretty similar in terms of the setup…I did live in this really small, really isolated town in the rural midwest and faced a lot of the same kinds of prejudice, rejection, and all the things that Michelle goes through, and it was pretty tough, but also some of the great things that she experienced I experienced too…but I always wondered what would have happened if I had stayed in that town. What would have happened if I had kept being in that situation where there was so much prejudice, where there was such a difficulty where people were so uncomfortable with the kind of changes that were happening around them, and so the book really grew out of my wondering and trying to imagine what some of the logical outcomes would be, ” Revoyr said.
As the interview part of the assembly came to an end and the time came for questions, many of the listeners were earnest and enthusiastic about asking questions. The first question asked by a woman from the audience was why Revoyr had specifically chosen “Wingshooters” as the title of her book. Revoyr said that “Wingshooters” literally meant bird hunters, and Charlie and even Michelle and Brett were bird hunters. Revoyr also added that the term “Wingshooters” expressed both freedom and beauty, as well as suggesting violence, which describes the book very well.

Another question asked was whether the same experiences that Michelle went through in her school were linked to Revoyr’s own childhood experiences in school, which Revoyr answered with a yes and even described specific experiences. The question that followed was why Revoyr had decided to leave Michelle parentless, and Revoyr said that she wanted to create a setting where Michelle was stuck. The last question was about why Michelle’s grandfather, Charlie, who had a lot of power, did not apply any effort into changing a lot of opinions in the town. Revoyr answered this by saying that as things changed in the town, Charlie lost his power as he also changed into a different person.
“Wingshooters” received many positive reviews from students, who felt that the book turned out to be much different from what they had originally expected it to be.
‘”Wingshooters’ was an amazing book! I was really happy that I chose to read it because it had a deep impact on me, and going to the assembly and meeting the author really inspired me to stand up against bullying and make a change. I was kind of upset when I heard that the book was fiction, but the book was well written and I really think everyone should read it. I actually liked it better than last year’s book for the Hero Project. ‘Wingshooters’ was so easy to read and every page was so unexpected and unpredictable! I recommend it to everyone! It is a must-read book!” sophomore Ashley Zendedel said.
Hero Project Coordinator Julie Goler also found Revoyr to be very inspiring to students and having a good rapport with them. Goler was very moved when she saw so many different types of kids participating in a project that encourages reading, and she truly believed that the habits that come from reading are the habits that will ensure success in all school work.