Beverly Hills Animal Society reaches out to animals in need 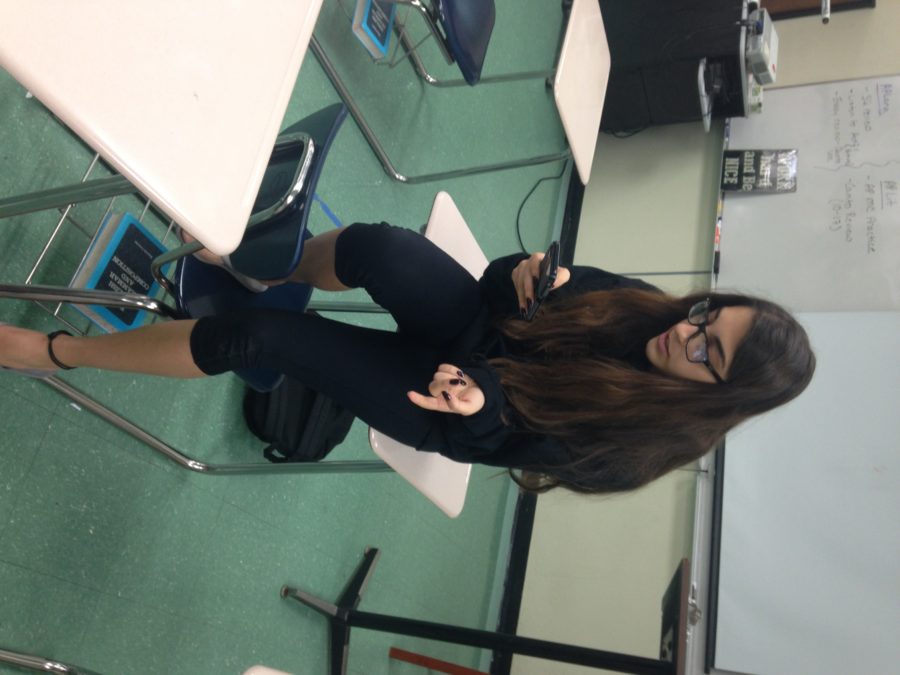 Simone leads the group discussion by reading off of her phone during a Friday meeting. Photo By: NATASHA DARDASHTI

Natasha Dardashti, staff writer
A new club concerned for the well-being of animals has surfaced.
The Beverly Hills Animal Society, run by Tamar Simone and Veronica Pahomova, is new to the club scene this year. The club is mostly affiliated with No-Kill Los Angeles (NKLA), a campaign directed toward preventing the deaths of unwanted animals in shelters.
“[No Kill] is a movement where they’re trying to prevent killings in shelters and adoption centers of pets who don’t have homes and who no one buys. If a pet isn’t bought or sold, they will kill it, so the movement is just to stop that and to help homeless pets,” Simone said.
By bringing NKLA to Beverly, Simone plans on shedding some light on other issues with animal cruelty.
“We want to raise awareness. Other than the No Kill movement, we want to raise awareness about current animal rights issues like fur and puppy mills and dog fighting and stuff like that,” Simone said.
In order to accomplish these goals, Simone plans on volunteering during adoption festivals to assure many pets are able to be welcomed into safe and loving homes.
“We reach out to organizations like No Kill and Best Friends Society. They have big adoption festivals and other events where they hold huge adoptions. They definitely need a lot of help, so we go there are help with selling the dogs and finding them good homes. We also hope to raise awareness of other issues by spreading the word,” Simone said.
Similarly, Pahomova plans on leading the club with simple goals to later accomplish larger ones.
“We’re embracing a functionalist perspective and plan on changing the community one step at a time, like promoting makeup brands that don’t test on animals, or pet adoption agencies that don’t support puppy mills,” Pahomova said.
Pahomova’s motivation to start the club was inspired by a love for animals and extreme distaste of their poor treatment.
“Ever since I was little, I’ve always loved animals…But not all animals are treated as well as we hope. So when Tamar brought up the idea of starting the club, I was all for it. We’re trying to make a difference and help bring awareness of animal abuse to the Norman Nation and the overall Beverly Hills community,” Pahomova said.
Exposure to the malice animals face was a factor that contributed to Simone’s wanting to start the club.
“Volunteering in [shelters] and seeing most of the conditions the dogs are in is just really heartbreaking. When you’re volunteering, you’re one-on-one. You see how much they need love and a home. It really pushed me to really want to help,” Simone said.