Why we can not let ISIS win

Veronica Pahomova cartoonist
Reader discretion: The bits of humor in this article are written with no intention to offend anyone or diminish the severity of ISIS, but to simply add a sense of comic relief. When talking about a group whose intention is to instill fear and anger, succumbing to their goal and never talking lightly about them is something to avoid. It is acceptable to add a piece of harmless humor as long as there is still acknowledgment of the seriousness that this topic deserves- so please click away if you find the humor offensive or that you are feeling too sensitive.
They’re not even a real state or the dominant religion, yet have as many as 30,000 foreign recruiters all over the world. They’re immensely religious and conservative, yet somehow are better at using iMovie than most westernized people. That’s right, here’s Jihadi Johnny! These are all descriptions of the Islamic State in Iraq and Syria, more famously known as ISIS. 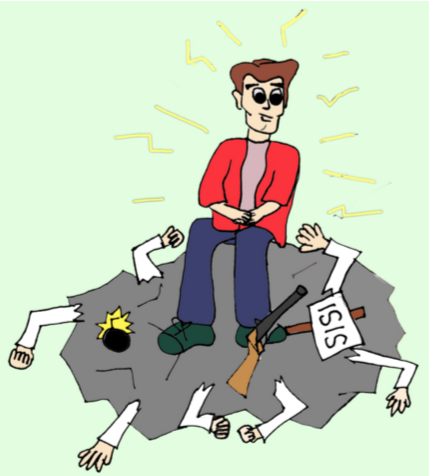 This militant group has managed to stretch not only their territory from northern Syria to central Iraq, but their inflicting fear to an even larger territory as well, especially in the United States. Though this motley crew of extremists has made it very clear that America is one of their targets, this is no reason to let the possibility of an attack plague one’s mind and affect one’s actions.
With recent events like the Paris attacks and viral video threats, it is understandable for victims and observers to be furious and concerned. When the situation ends with the deaths of hundreds of innocent people, who wouldn’t be? But succumbing to those vast negative emotions will not only hurt ourselves and each other, but also the impregnable dignity and powerful stance of our nation as a whole.
ISIS’ goal is not only to inflict physical pain and destruction onto the non-Islamic masses. They crave instilling emotional pain as well. Members have taken it upon themselves to modernize their propaganda and threats, digitizing them by releasing grotesque, heart-wrenching, high quality videos, allowing their anger-driven chants to appear on the cellphone screen in a child’s hand. They want to make every single person terrified. Their 12th edition of Dabiq, the official magazine of ISIS, was titled “Just Terror”for crying out loud!
One cannot argue against the fact that this establishment is sophisticated, well funded and intelligent. They know that the best time to catch a victim is when he/she are scared and angry. And it is this fear and anger that leads people to take actions that they would have never dreamed of doing when their mind wasn’t in a state of panic.
It is moments like these when people are more likely to make reckless, unethical decisions, like choosing to support Donald Trump, or buying a Nickelback album. It is moments like these that allowed Adolf Hitler come to power. It is moments like these that bring sadistic satisfaction into the “hearts” of ISIS members.
However, this article’s intention is to in no way undermine the danger of ISIS. This group is highly sensitive and violent, making them a serious threat to pretty much anyone and everyone who isn’t them. The solution is not to mitigate these inexcusable attacks and their severity, but merely take these instances and reflect on them in a rational and reasonable way.
We cannot continue to cower from men and women who cannot comprehend the incentives behind basic acts we experience in our daily lives, like love and reason for instance- or gun control.
We are Americans. We declared independence and separated from the great industrial superpower that was Britain, and became the current republic superpower that we are today. We come from the nation that created a countless number of revolutionary inventions, such as democracy, 3D printing, the light bulb and swivel chairs.
What has ISIS created? A catchy acronym.
So as long as it’s safe, keep going shopping in that overly crowded mall! Go take that band trip to London that’s been the reason of that uncontrollable excitement! Continue doing the things that create treasured moments of happiness and bliss in life. In a crazy, unfair world like this, those memories and experiences are meant to be treasured, not canceled in fear of possibly unauthentic threats.
Do not be the reason for a petty, selfish terrorists to have an immoral feeling of accomplishment. Do not let these extremists, who were failed to be taught the basic principles of sharing and acceptance in preschool, form an undeserved smile on their stiff faces. Do not let them win.