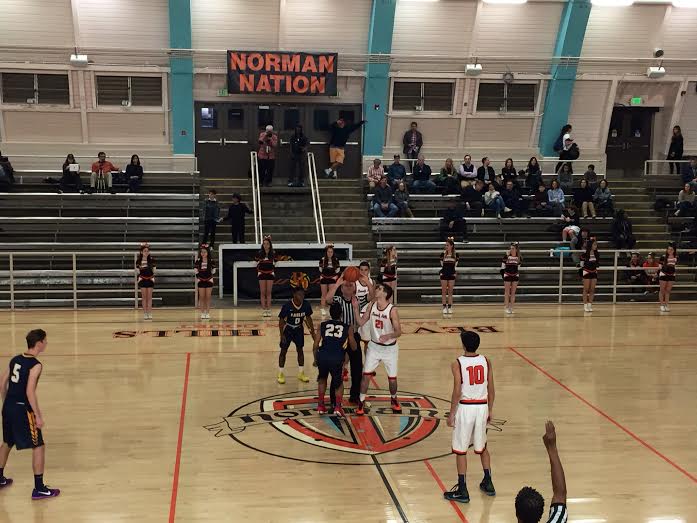 Beverly sets up for the opening tip-off against El Segundo. Photo by: NOAH LEE

Max Yera staff writer
Varsity boys basketball defeated El Segundo 82-54 in the Swim Gym on Wednesday, Jan. 13.
The matchup was the first of the league season for the Normans, putting the team at a 1-0 record.
“I think any win is a good thing,” senior co-captain Max Walder said. “We look like we are progressing greatly and I’m excited for what the future holds in store for us.”
The Normans were led by senior twins Mason and Maddox Daniels, who scored 24 and 11 points respectively.
“We played well defensively and it translated to good offense,” Mason Daniels said. “We played well tonight and we are improving.”
However, the win, though impressive, was certainly not perfect in the eyes of the varsity players.
“We didn’t have the best game collectively as a team,” senior co-captain Denzel Holt said. “[However] we were knocking down shots despite the several unforced turnovers we had.”
The Normans’ next game will be at Hawthorne High School on Friday, Jan. 15, where they will take on the 0-1 Cougars.