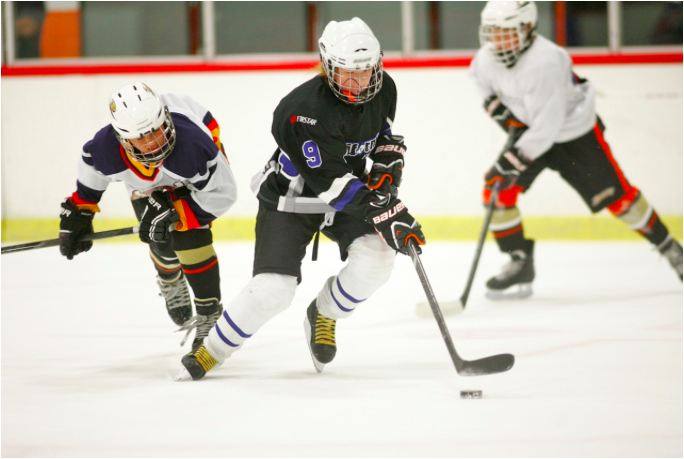 Sophia Goldberg, staff writer
With encouragement from her family members in a sport played by her brother, sophomore Dominique Petrie has developed as a hockey player on her all-boys team over the course of 11 years.
Petrie practices in Westminster twice a week and in Anaheim once a week with Anaheim Junior Ducks Bantam AAA-1 with games and tournaments varying between the locations every weekend.
Although Petrie is the only girl on the team, she doesn’t feel as if there is any sexism from her teammates.
Petrie decided to play hockey when she fell in love with the rink, going as often and staying as long as possible.
“I decided to play because I had an automatic love for the game that is unexplainable. I would ask my parents to take me to the rink all the time,” Petrie said. “When I finally dragged them there, I would always tell them five more minutes or one more lap until I got kicked off the ice by the Zamboni.”
Petrie believes the skills she has developed in hockey have allowed her to become a better athlete in all sports, including her varsity play on Beverly’s tennis and basketball teams.
“Hockey has allowed me to be an overall better athlete because it takes strength, conditioning, hard work and [competition] that is essential to any sport. I also found that all of these things make me an all-around athlete if I’m not the best at the sport,” Petrie said.
Varsity basketball coach John Braddell recognizes Petrie’s toughness, and how the lack of fear from her hockey experiences translates to full effort on the basketball court.
“I think her toughness from hockey is translated onto the basketball court. She is not intimidated by anybody, whether they are bigger, stronger or faster,” Braddell said. “She plays hard no matter what.”
Colleges from across the country have sent Petrie offers to attend their school and play hockey on their teams. She believes this sport has given her a chance to attend a top school while playing the sport she loves.
“Hockey is going to be a major part of my college life. It’s going to help me get into college as well as getting a scholarship. Without hockey, I wouldn’t be able to get accepted into a majority of these schools,” Petrie said.
Petrie reflects on the different skills hockey has taught her over the course of her training, in both the sport and in life.
“Playing hockey has taught me many things, some being social skills and the ability to build friendships that will last for a long time. Mental toughness is a big component both on and off the ice. On the ice, you have to be able to make a bad play without having it affect the rest of your game,” Petrie said. “Off the ice, you have to be able to take criticism from scouts, coaches, and even your family and apply that anger into training and proving them wrong rather than getting upset. Having the ability to be mentally tough is something that I am still working on, but it is a great quality to have for hockey and my life.”