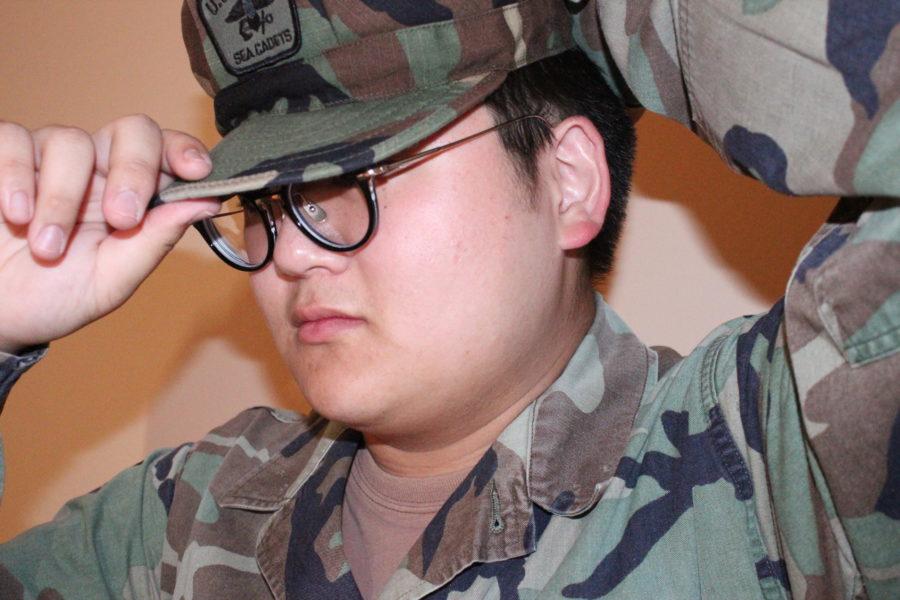 Senior Andrew Park aligns his green-hued hat according to his ranking. "It's supposed to cover my eyes because I'm an officer," Park said.

Priscilla Hopper, cub writer
Outside of school some students put on helmets for football and other students dress in costumes for theater. But for senior Andrew Park, donning a uniform is not only for an extra curricular, it is his duty.
Park is a petty officer of the Los Angeles division of the U.S. Naval Sea Cadet Corps (USNSCC). The USNSCC is a federally chartered non-profit youth organization for kids ages 11 through 17. This program primarily focuses on familiarizing cadets with Navy life and Navy-style discipline.
“We learn about anything military related. [We go] to military bases and we get taught by real generals and [cadet officers] and it’s like the first step of Reserve Officers’ Training Corps or a career in the military,” Park said.
Park started the USNSCC at 14-years-old. He was inspired by an alumnus, Jin Soo Park, who participated in the program and is currently in the Naval Academy.
“[Jin Soo] looked like he had a purpose. When he walked he had a purpose, you could see it in his eyes. It’s like he had a purpose for everything he was doing, and that’s what I wanted…something that is unselfish for the better of others,” Park said.
Along with the physical and mental training the USNSCC course offers, Park participates in competitions such as the National Flagship Competition. Different categories include paramedic development, line heaving and shooting.
“There is shooting which I ranked third in. Out of ten shots, I made nine…it is a mental therapy and there are so many things that go into shooting, the angle, the way you position your gun, the way you see the iron sights and even if you have something off your shot, it completely misfires. Even the tiniest variables can make a difference,” Park said.
Park will attend George Washington University in the fall. He plans to study political science and history then transition into the Navy as an officer.
“Being in the USNSCC really helped me appreciate things more. I think four years in college would give me more time to mature and really know the world before tackling it in the Navy,” Park said.
Park’s family encourages his decisions to further his career as a Naval Officer.
“I feel he respects other people and it definitely made him more independent in everything he does. I will support him as long as he believes he is making the right decision,” Park said, translating for his mother Mia Park.
He constantly pushes himself to achieve his goal of becoming selfless and to provide safety to America.
“I think the glory is greater than the pain, so no matter how hard it is, I think the outcome really covers up the hard stuff we go through. It could be shooting, it could be drills, it could be running, and that’s what makes me want to continue,” Park said.