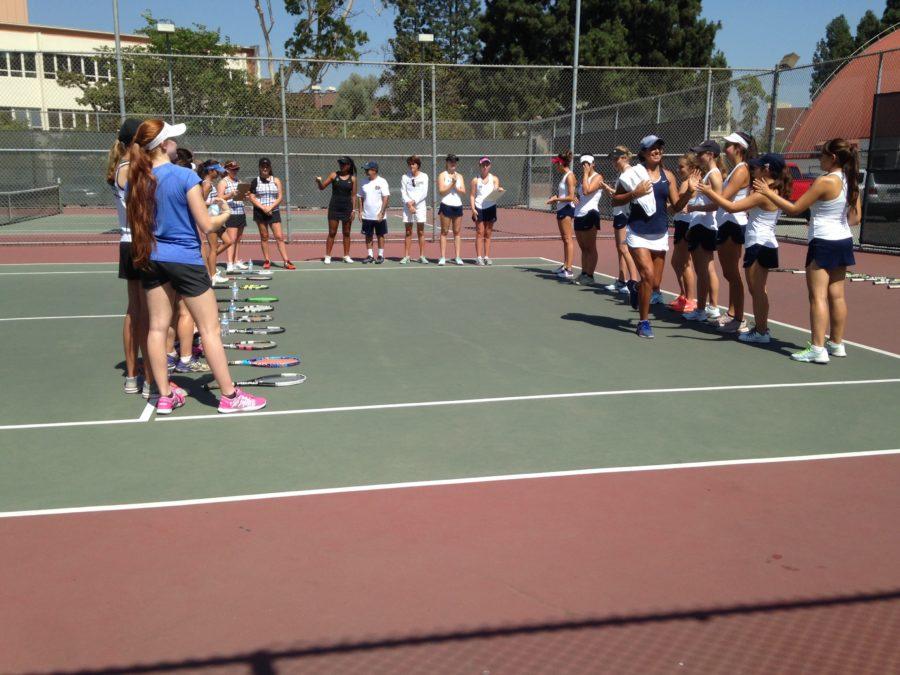 Sam Bernstein staff writer
The girls varsity tennis team was all smiles before facing off against Notre Dame High School in their first match of the year on August 30th. Beverly had a rough showing, losing the meet, with several members being defeated 0-6.
Freshman Hannah Kimura was one of these members, losing 6-0 in her first match of her high school career. Kimura was up against Notre Dame captain Avery Aude. Kimura, on the outside, looked confident. She kept a calm composure throughout the game, and looked fierce on the court. Kimura didn’t seem to fret before playing the Notre Dame captain, and she attributed her confidence to her preparation.
“I don’t really focus on who I’m playing, I focus on how they hit the ball, because that’s all that matters,” Kimura said. Her preparation methods paid off, as she improved throughout the day. She lost her second match by two points, but won her third match, 0-6.
Kimura was not the only player on the team that had a mixed day. Junior Sabrina Saitta and senior Justine Elitzur lost an intense game in their first doubles match of the day. Before the 5-6 defeat, Saitta remarked on her improving chemistry with her partner.
“You have to have good chemistry with your partner to make points work. You gotta be good friends with them, and know their every movement and where they’re gonna hit the ball,” Saitta said.
Coach YuYu Myinttun was very attentive at Tuesday’s match, walking from court to court to observe every player in her first game. Myinttun would watch until there was a stopping point in the action, and while a player would go to get water during the break, she would give advice and motivation to the player. Myinttun praised how hard-working the team is, and attributed their quick progression to their workhorse tendencies.
“Right now our team is coming together, they’re working hard every day, and I think just teamwork together will bring in everybody. Just giving good vibes to each other will bring a team together,” Myinttun said.
On top of winning a conference championship, her goals, first and foremost, are to strengthen their core as a team.
“Our goal is, for every match, we want to get better and better. We are starting off the season with a really high-level tennis school, and we know the level we need to be at,” Myinttun said. “Our goal is to play our best out there and to leave it all on the court with them, and then to just build on that.”