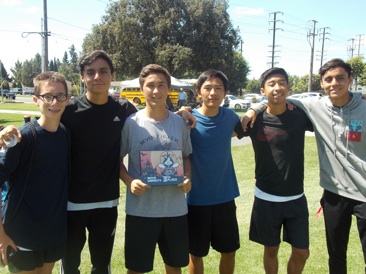 Rinesa Kabashi staff writer
Boys varsity cross-country placed third in the small schools division for the three-mile Great Cow Run located in Cerritos Regional Park on Sept. 1. The races were combined between large, medium and small schools.
With nearly 300 runners taking part in each race, boys varsity placed 12th as a team out of 35 different schools.
In the boys varsity race, senior Jonathan Cohen took 17th place with a personal record-breaking time of 15:13.2 in three-mile Great Cow Run meet.
“I started off fast in the race to get in front of the pack and I focused on pacing. I saw other runners ahead of me, but continued to run my own race and finished with a time I am happy with,” Cohen said. “I was happy that I ran a new personal record and was able to see everyone else do really well.”
Cohen’s teammate JV cross-country runner John Gibb was blown away by Cohen’s performance.
“He started off really well. He did the first mile in like 4:48 which is spectacular. And then he started to slow down as expected. He still managed to finish strong even though by the end he was absolutely dead,” Gibb said.
Cohen plans on running in college and is considering USC or UC Berkeley, although that is still to be determined. He thanked his teammates for all the support throughout the meet.
“I want to give a shout out to the girls for cheering me on, I couldn’t have done it without them.”