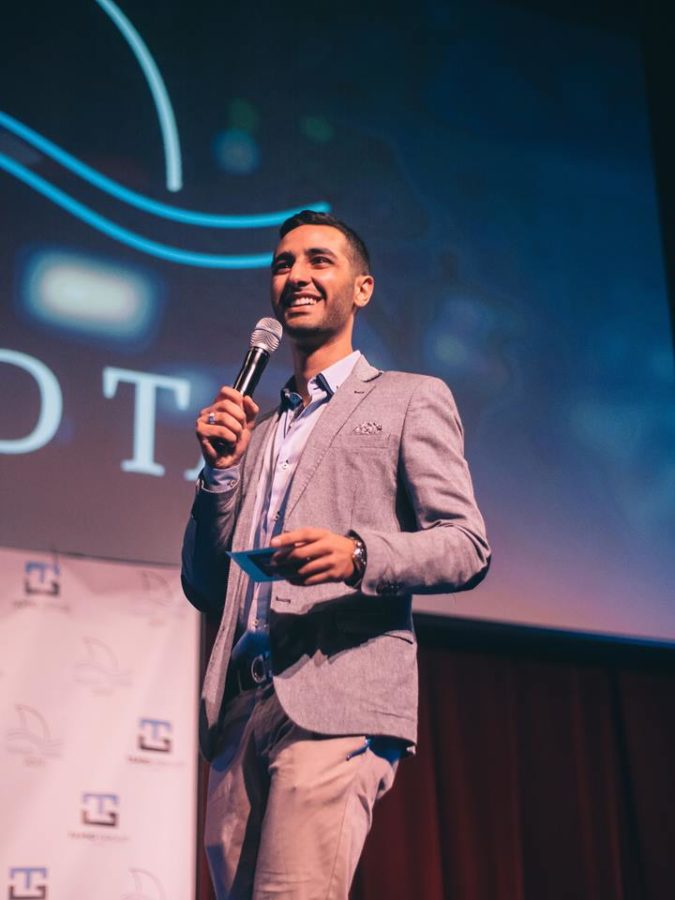 Jamie Kim news editor
More than 500 pairs of eyes eagerly watch the live version of Shark Tank meets college students. And the success of this event was majorly spearheaded by one Beverly alumnus.
A rising junior at the University of Southern California (USC) at the Marshall School of Business, Daniel Newman, Beverly Class of 2015, recently organized an entrepreneurship event called TAMID Tank at USC.
TAMID is a national student organization that aims to train the next generation of business leaders through hands-on consulting and investing collaborations with Israeli companies and their stocks.
Newman was first introduced to the idea of USC’s TAMID Tank last year when he attended the TAMID National Conference and met the founders of TAMID Tank at Queens College in New York.
“I thought to myself that we have to bring this to USC. We have incredible student startups, an amazing venture capital network and fanatic Shark Tank viewers,” Newman said.  “From then, I was elected Vice President of Operations of TAMID at USC and sought to make it a reality.”
The event, which took place April 24 on campus at the Bovard Auditorium, showcased USC’s top three student-led startups to pitch to a panel of venture capitalists for potential investment and grant opportunities. It also featured keynote speakers, such as Audrey Jacobs, the founding partner of OurCrowd.
“Our event hit its capacity at 500 students and was a massive success, with $3,500 awarded in grant money to the startups,” Newman said.
Among those who attended was UCLA rising junior Aaron Boudaie, Beverly class of 2015.
“I was proud to see Danny’s many months of hard work pay off. He turned a far-fetched idea into a major success. Danny’s going to be a great CEO one day,” Boudaie said. “I learned more about the startup scene in Los Angeles by attending.”
While TAMID Tank was only a one-day experience, Newman hopes that the attendees will remember this event for much longer.
“My objective was to inspire the hundreds of Trojans that are sitting on their startup ideas to actually take the leap and pursue them. A lot of students believe that now is not the right time or that they need more experience before launching a venture, so they wait, oftentimes, indefinitely,” Newman said. “Now is actually the best time to launch a company. We don’t have to worry about kids, rent, a job, etc. If a startup takes off, excellent. But even a failed startup is a gained experience.”
Newman, who is also a senator for the USC Undergraduate Student Government, attributed much of his success to the skills he acquired while a student at Beverly.
“Serving as senior class president in ASB definitely developed my leadership capabilities in a way no class could and really prepared me for the journey ahead at Marshall. As the creator of Beverly’s first Talent Show in decades, I learned how to assemble a committee, secure high-profile judges and plan a successful event that’s attended by hundreds,” Newman said. “My involvements in DECA and Robotics also proved to be incredibly useful, especially at Marshall where I interact with like-minded entrepreneurs every day.”
According to current senior class president Ryan Neydavood, Newman acted as a role model for him.
“I learned a lot from Danny after watching him plan our now annual talent show. He created the first one, and I watched him develop a simple idea into a huge event. He communicated well, worked hard and is always there for me when I have questions,” Neydavood said.
Newman also had advice for current students at Beverly who hope to venture into business and entrepreneurship.
“I have three words of advice: take the leap. Even when we have great ideas, we allow illusionary reasons such as ‘I’m too young’ or ‘I’m not smart enough’ to stop us. Something I learned from founding my first company, TutorYou Beverly Hills, my senior year at Beverly is that you just have to take that first step. The rest is much easier than you believe, and you’ll experience a ton of self-development along the way,” Newman said.
Furthermore, he advises everyone to use the network that the Beverly Hills district offers.
“Don’t underestimate the value of the Beverly network. There are so many successful alumni, including myself, that are extremely willing to lend a helping hand to any aspirational Norman. A lot of us wouldn’t be where we are today without this network and want to pay it forward,” Newman said. “Try reaching out to a couple alumni—you’d be surprised by how many respond and will be willing to grab coffee or lunch with you.”