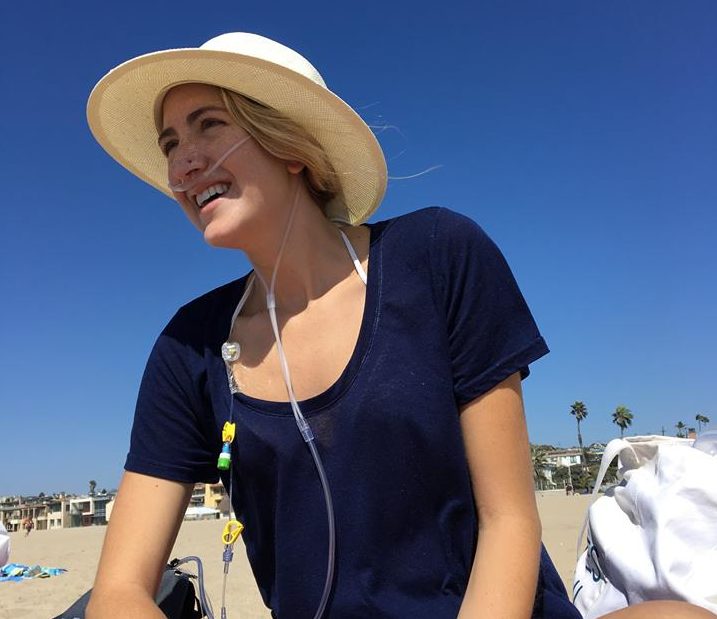 Jason Harward co-editor-in-chief
The age of 25, for most people, is the beginning of life, not the end. But, as anyone will tell you, Mallory Smith, class of 2010, was not most people.
Even though her cystic fibrosis (CF) diagnosis made turning 25 seem closer to an end, Mallory had plans for the life she saw ahead of her. Only a month before she died on Nov. 15, she spent hours fantasizing about the life she was hoping for with her mother, Diane Shader Smith.
“Mal wanted to talk about moving back to California. It was the first time she ever dared to dream about her future; she wanted to live with [her boyfriend] Jack [Goodwin] at the beach and work on her memoirs,” Shader Smith said. “She was excited to start surfing again. It was the happiest I remember her being–she thought she had a chance at a normal life.”
But when living through a daily regimen of dozens of pills as well as hours of IVs and breathing treatments, the fragility of such plans becomes very clear. As Smith wrote in her blog, “[Plans are] no more than shards of hope we cling to, fantasies for our futures that help us organize our actions. So many of us, with or without chronic illness, end up with lives that bear little resemblance to the plans we made.”
As she predicted, Smith’s life took a twist that had not made it into her plans. For her family, friends and acquaintances, however, there is not much reminiscing about what could have been. Instead, there is an appreciation of what was.


Making it look easy
“Each year when most people tell themselves they’re going to join a gym or eat healthier or lose weight, I tell myself that I’m going to have a less tumultuous year coexisting with my illness,” Smith wrote in her blog.
While it’s thought-provoking and powerful in an understated manner, her take on New Year’s resolutions also provides a snapshot of how different her reality was.
Joanie Garratt, her eighth grade history teacher at El Rodeo, saw what she went through every day when she chaperoned the annual trip to Yosemite National Park. The deeper, constant struggles she faced were eye-opening for Garratt to say the least.
“When I went to Yosemite, I would go into her hut and, for the first time, I could see what she went through every day. She was hooked up to machines and it was very emotional to see what someone had to go through on a daily basis. It made me admire her so much for what she went through. We take so much for granted,” Garratt said.
As early as eighth grade, Mallory exhibited uncanny determination. According to Garratt, she would miss school for long amounts of time, but would always return with her work finished.
That attitude continued during Smith’s high school years at Beverly, where she graduated in 2010. Dan Moroaica, her junior year history teacher, was incredibly impressed with her personality and strength, calling her “one of the most ambitious and hardworking students” he has ever taught.
“If I hadn’t known what she was battling with, I never would have known the life she lived, because she never let any of that affect her smile or her personality,” Moroaica said.
Smith was a straight-A student, three-sport captain and prom queen in her high school campaign, eventually going to Stanford University. Marla Weiss, her volleyball coach and biology teacher, still designates her highest praise for Smith as an athlete and person.
“In volleyball, she was by far the most inspirational student-athlete I have ever coached,” Weiss said. “She was passionate, dedicated, disciplined and very competitive.”
One game that stands out in Weiss’s mind was the first round of CIF playoffs in 2009, during Smith’s senior year. Smith had just undergone intense antibiotic treatment and it looked like she would not be able to play; the doctors simply would not check her out. However, against the wishes of her doctors, Mallory left the hospital, made the game and helped the team advance.
“Looking back, I think Mallory played for her teammates and friends more than she played for herself. That’s just who she was,” Weiss said.
Even so, Mallory never really let the disease get to her. According to her father, Mark Smith, she maintained her positive attitude until her last moments.
“[Mallory] came back from the brink of death time and again. And in the last months, weeks and days of her life, she confronted her tribulations bravely, with dignity and grace,” he said.
Memories tell the story
The more nuanced part of Mallory, the one only her friends and family knew about, is most completely told through memories: the small moments in time that each of her closest friends remember.
Jack Goodwin, Smith’s boyfriend, remembers a specific note she wrote to him in the days after a double lung transplant. It said, simply, “You have so far exceed

ed my expectations of what is possible for love.”
The two met at the 2015/2016 Snapchat New Year’s Eve Party thrown by Stanford alums, and Goodwin asked her out a few months later when the two reunited in the Bay Area.
“She showed me how to be kind, to live life fully, and most importantly, she showed me how to love,” he said.
Talia Stone, one of Mallory’s best friends, remembers hours of simply talking and eating M&M’s.

“That’s what our friendship was: enjoying each other’s company and our friendship as a whole,” Stone said.
Jason Bellet, Mallory’s lifelong friend and neighbor, will never forget one specific day in Santa Barbara in the summer of 2012. The two reconnected after some time apart, and the experience sticks in Bellet’s mind to this day.
“Mallory showed me how to be a great friend. She helped me appreciate our environment. And she gifted me some of the best memories of my life,” Bellet said.
Rebecca Yukelson, Mallory’s close friend and teammate on the girls water polo team, remembers a sleepover that happened to include very little sleep. The two listened to all of the music on each of their iTunes libraries, forming a bond over shared interests such as Jewish summer camp songs. The first time Yukelson met Mallory, she saw one of her breathing treatments, a daily activity that alleviated symptoms of CF. That was, for Yukelson, the start of a “beautiful” friendship.
“She knew her time was short, and she really knew how to take advantage of the moment and understand the meaning of life. It was inspiring and humbling to have a friend like her because she taught me to be open with my emotions and always strive to be an authentic human being,” Yukelson said.
None of these experiences are connected. But that’s the point. Everybody remembers Smith for something different yet equally special. In that way, Mallory lives on.
‘When your president would prefer you dead’
Technically, I’m supposed to keep myself out of the story. But I’m going to break that rule and offer a challenge to any reader opposed to the Affordable Care Act. Read Mallory’s piece “When your president would prefer you dead” and see if it changes your mind. Spoiler: it will.
Even though Smith could have been completely occupied with her predicament, she found time to think about and inspire others. Talia Stone learned some of life’s important lessons from Mallory’s selflessness.
“Mal taught me to squeeze the most out of every day and view each day as a gift. If you’re not happy with something, take initiative to change it, don’t just remain complacent because that’s what you’re ‘supposed’ to do,” Stone said.
Yet many of Smith’s friends and family have transcended simply learning from her; they fight CF and other terminal diseases in her honor.
Lunges4Lungs is a charity created by Mallory’s dear friends Bo Abrams and Michelle Wolff in honor of Mallory and all other patients dealing with CF, especially those who need an organ transplant. Many clubs and organizations on campus, including ASB and Highlights, as well as stars such as Katy Perry, did 10 lunges to raise awareness and money.
The girls varsity soccer team dedicated its first scrimmage against Brentwood to Smith’s memory, wearing bands with her initials. Captain Camilla Wolff, a family friend of Mallory, saw her as an inspiration to everybody, and wanted to honor her as such.
“She always had a smile even though she had to take over 60 pills a day and do IV treatments during the middle of the night,” Wolff said. “She felt lucky to even be alive; she was able to fight through this condition and she was so optimistic about her life.”
Mrs. Garratt will be organizing a team to run in Mallory’s honor for the Beverly Hills 5k on Jan. 28. Consider participating in Mallory’s honor. Learn more by visiting Garratt’s room, V-21.
Delete Image
Align Left
Align Center
Align Right
Align Left
Align Center
Delete Heading