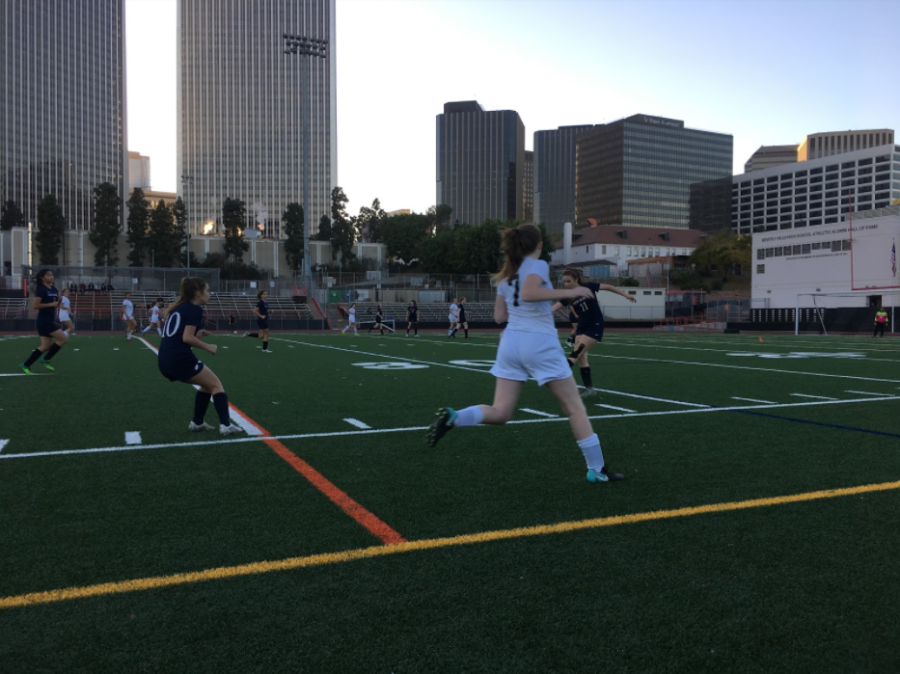 AJ Wolken staff writer
The girls varsity soccer team pulled away in the second half of their game to earn a 5-1 victory over the winless New Roads Jaguars on Wednesday, Dec. 13. The home victory raises Beverly’s record to 5-1, and drops New Roads’ record to 0-5.
Through a close and physical first half, the two teams exchanged long shot goals, leaving the score tied at one by the end of the half. Forward Lauren Aviram saw a lack of communication as the main cause of the team’s first half struggles.
“I think there was a lack of communication and calmness. We usually play as one, but everyone was just kinda frenetic,” Aviram said.
In the second half, Beverly’s offense erupted to score four goals, and the defense held New Roads scoreless for the rest of the game. According to midfielder Lauren Stein, the improved communication was key in the second-half run.
“We knew we needed to step up and play how we know how,” Stein said. “Our communication and ball control improved, and that’s what allowed us to score.”
In the midst of a season plagued with injuries, the team has won five of their last six games, winning their past three games by at least four goals. Aviram insists that the team has proved it has the depth and strength to overcome these injury setbacks.
“As for the injuries, it’s only a minor setback. We are still a strong team and luckily everyone on our team is talented enough to be able to have a recovery,” Aviram said. “It’s not about the mistake, it’s about the recovery.”
The girls varsity soccer team looks to continue its three game win streak today at home against undefeated St. Pius X-St. Matthias Academy.