Arming teachers is the worst educational idea of the century 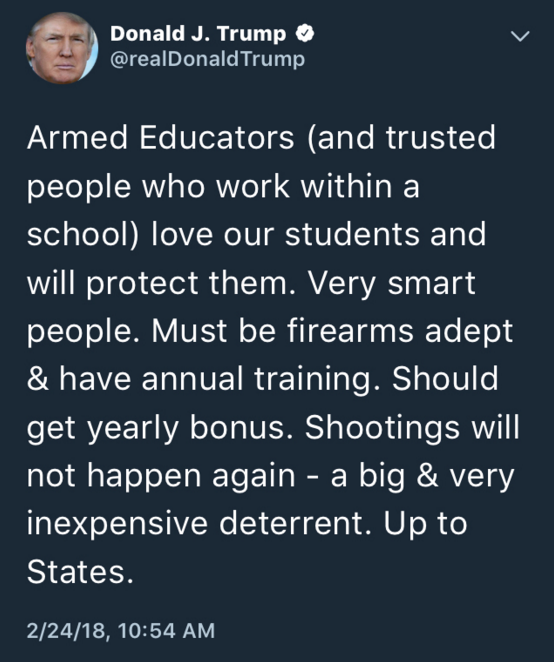 Sam Bernstein staff writer
In wake of the recent tragedy at Marjory Stoneman Douglas High School (MSDHS) in Parkland, Florida where 17 high school students were massacred in the 17th school shooting of the year, both sides of the American political spectrum have stepped up to the plate with more than “thoughts and prayers”. While liberals call for tighter background checks and more restrictions when purchasing a gun, the conservatives reacted with the most ludicrous educational idea of the century: that school teachers should bear arms at school. If that is the best idea that Republicans have, we’d be better off with their “thoughts and prayers”.
A majority of educators don’t want this. The National Education Association (NEA) has denounced this idea. An LA Times article gave opinions from educators from all around the greater Los Angeles area, and a majority of those teachers dismissed this idea. When President Trump floated this idea at a meeting he had with survivors of the MSDHS shooting, the crowd gave a resounding, “NO” to Trump’s proposal to arm teachers.
Physics teacher Kevin Bowers agreed with the NEA in rejecting the proposal that teachers should bear arms in the classroom.
“I’m worried about [guns] being on school grounds in the first place. Certainly things get stolen at school and I don’t want a gun to be one of those things that gets stolen. I just think there’s other, better ways to deal with the issue than to just get into an arms race,” Bowers said.

The United States is in no position to enter into an arms race against ourselves. We are in no place to continue throwing more guns at more people. We cannot expect school shootings to stop happening unless we dissolve America’s dangerous gun culture. Arming teachers would only enable our gun culture to continue to grow.
The main advocates for putting guns in classrooms are groups who can make money off this. The National Rifle Association would make a fortune off our fear. There are 3.5 million teachers (both public and private, NCES) in the United States. If President Trump’s idea to arm 20 percent of teachers goes through, 700,000 teachers would be armed. There is no realistic way that we can expect that 700,000 teachers own guns. Schools will have to purchase firearms in bulk and that money will go right into the pockets of Wayne LaPierre and the NRA.
Times are tough. The United States is at a crossroads and human lives are at stake. Gun control isn’t a black and white issue. There are many complexities in this issue and there is no one perfect solution but there are several ways to create positive change. There are several steps the United States can take to prevent school shootings in the future but arming teachers is not one of them.