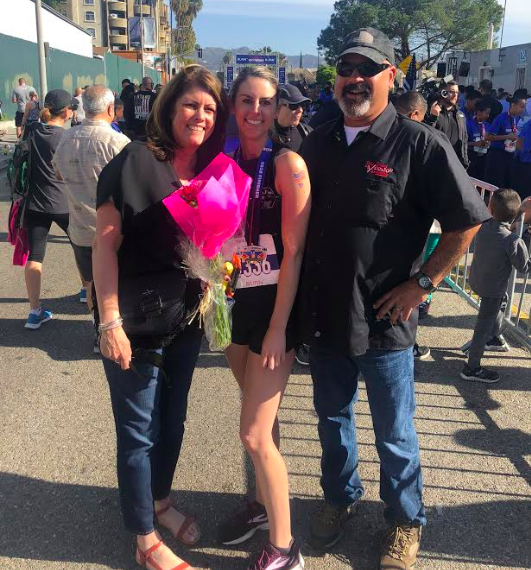 Emma Newman cub writer
College counselor. 26 miles and 385 yards.
These phrases aren’t commonly associated with one another. But at our school, college counselor Casey Rowley happens to be a three-time marathon runner and a participant in 300 total races.
Rowley’s long journey as a runner started when her brother became interested in the idea of running marathons.
“I started running as a bonding bet with my little brother,” Rowley said. “I never ran more than a mile back in the sixth grade when I had to. My brother, at the time, got really excited about this running group that started to train for the marathon at a really low mileage.”
This event did not spark a great interest for her brother, who has only run one marathon with Rowley. However, it did inspire Rowley to begin her running career, which has been marked with races, half-marathons and marathons.
These marathons require a tremendous amount of work, and even with three to four days a week of training, runners still can get hurt. According to the American Academy of Physical Medicine and Rehabilitation, about 70 percent of runners will get injured at some point during their career. Rowley happens to be a part of this majority of runners.
“I ran that Malibu half-marathon and toward the end of it, I started feeling some pain in my hips,” Rowley said.
After that run, Rowley discovered that she has an injury in her meniscus, or knee area. This injury forced her to stop running entirely. Rowley went from running “25 miles a week to nothing”. However, she has since been diagnosed with a strained and swollen knee. She was then given the “green light” to start running again.
Physicality may be the most obvious challenge as a long-distance runner, but it is certainly not the only factor that makes this hobby difficult. Willpower is another feat that Rowley and other runners must tackle.
“[One of the] obstacles is [that] at the beginning, you get really excited,” Rowley said. “And so you have to remember [that] you’re going to be running for potentially four hours. And so you have to conserve energy while you’re super excited…Mentally, it’s hard [when] people are passing by you, but you have to remind yourself, ‘I know my body.’”
Although runners may struggle throughout the race with pain and loss of energy, if they’re like Rowley, the end of the race will allow them to get back some of that energy that was lost.
“The start is antsy, anxious, [and] excit[ing], and then the end is an emotional finish,” Rowley said. “I can see it. I’m almost there. I’m in pain. But you’re just so excited that you see the finish line that you can run through any pain.”
This sudden determination that many runners get is what allows Rowley to finish her races.
“If you look at runners’ pace times at the end of a race, they typically are faster than they were the whole race,” Rowley said. “If you look at it, your body is completely depleted. But at the end of a race, your mind gets so excited that you just get that adrenaline to push you through. The end of a race is emotion and authenticity.”
Despite the struggles both physically and mentally, Rowley still continues her journey as a long-distance runner. This is partially because of the “mental clarity” she gets while running.
“Running is the one thing that I can…go and I’m outside and I’m completely disconnected,” Rowley said. “It’s the one thing that allows me to shut my brain off or allow my brain to think for miles and miles, and it helps me process.”