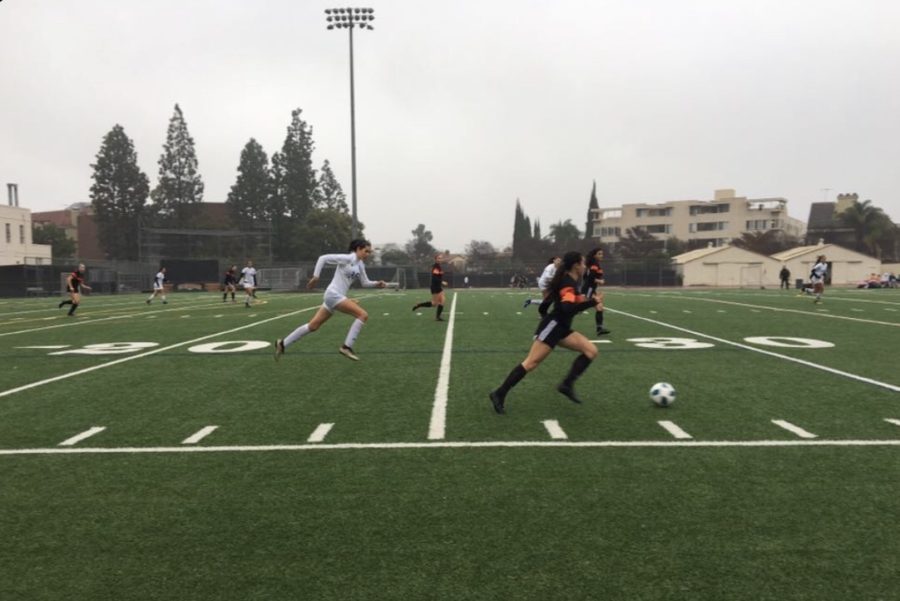 Rinesa Kabashi staff writer
The girls varsity soccer team won 1-0 against the Culver City Centaurs  overcoming an eight-year losing streak on Wednesday, Jan. 16. This victory puts the team  with a record of 4-1 in league, giving them the chance to qualify for the D4 CIF playoffs.
“It felt incredible to finally beat [Culver] after so long, especially knowing how far our program has come in the past few years. We’ve won a bunch of games this year, but this one definitely stands out and proves how far we’ve come as a team,” co-captain senior Dani Elitzur said. “This game was super important to win to give us a good record for playoffs and some momentum going into the second half of the league season.”
Although it was raining during the game, the team still navigated through the conditions.
“The field was slick today and the ball was heavy. But our touch on the ball was sharp and we were able to score early and then keep a good defensive shape to maintain the lead. Culver has a height advantage so we wanted to limit their deep throw-ins and corner kicks, and for the most part we were able to do that,” varsity coach Ryan Franks said.
Franks believes that the team needs to build off this win and continue to blossom into the team he knows they have the potential to become.
“It is my hope that winning today’s game will give us the boost we need to finish the league season strong. Now we know the level we can play when everyone is engaged and focused. Our goal is to make playoffs and make a playoff run in Division 4,” Franks said. “If we can get first or second place in the Ocean league that would probably get us a higher seed in the playoffs.”
Midfield forward Ashley Heravi was proud of her team and the outcome of the game.
“The most memorable part of the game personally was when we all ran and hustled together after scoring the goal. We…congratulated Lauren Stein for an amazing shot. We were all celebrating a special moment that defined all the hard work we’ve put in to get that goal,” Heravi said.
Senior Lauren Stein believes that the teams unity lead to her winning goal.
“It felt amazing to score the winning goal and it was truly a team effort. Beating Culver was one of the highlights of my Beverly soccer career,”  center midfield Stein said. “I truly believe this was the most important goals I have ever scored.”
Their next home game is Friday, Jan. 18 against Lawndale at 2:30 p.m.