Theater tech finds friendships in the best of situations 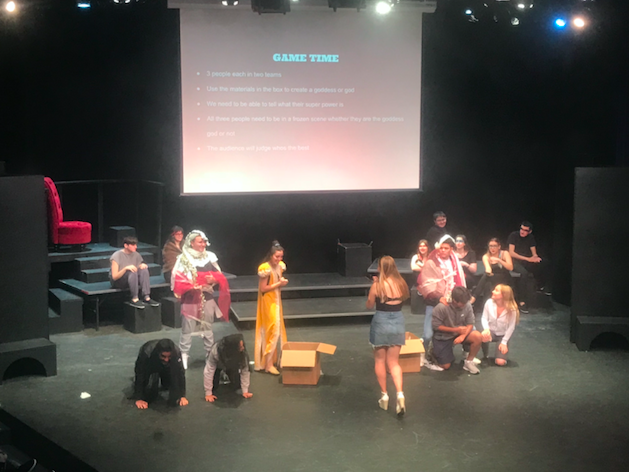 Candice Anvari cub writer
A group of people that support each other “through thick and thin” teach each other what real friendship is in a room full of lights, props, wires and microphones.
The theater tech crew is the backbone for all school theater productions because they do the behind the scenes work. They have started making preparations for the upcoming school musical, Mamma Mia, and they are behind all the theater productions. The group has developed bonds with each other while working together throughout this year. They have had events in which they sang karaoke songs, laughed, talked and spent quality time with each other for hours on end.
“In the beginning of the year we all went to one of the senior’s houses and we all got to know each other a bit. We played some bonding games, we ate, we talked and it was really fun,” sophomore Alyssa Shwartz said.
In October, the theater program offered a karaoke day in which the crew took a break and sang songs.
“Also, there are just some days in tech where we just have fun. For example, one day when we were putting on ‘Midsummer Jersey,’ we finished everything for the show so we got the speaker and microphones and we just had a karaoke day, which was a lot of fun,” Shwartz said.
The bonding event and the karaoke were memorable for the crew.
“My favorite memory is either techie bonding or karaoke,” sophomore Rhiannon Carter said. “We had such a great time. It was so nice to be able to hang out with some of my favorite people outside of the program.”
The program created friendships between people who didn’t know each other in the beginning of the year.
“Well, in the beginning of the year I didn’t really know anyone in tech, but now my best friend is a techie and I love her so much. I’ve also talked with people I never talked to before and they are so much fun to be around,” Shwartz said.
The crew teach other important life lessons that can help them become better people outside of school.
“I could not imagine a better group of people than them to work with,” Shwartz said.
The crew make a team effort when it comes to tackling obstacles. They often have to deal with props breaking and lights not working, but they make an effort to put everything back into play. During rehearsals, they try to make everything run as smoothly as possible.
“Well we always try to work our way around it, because one obstacle thrown at one of us affects us all, so we try to get through it together,” Carter said.
The group is “unique” and they care for each other immensely.  They work in the theater during school and even after school. Outside of the program, the crew members are there for each other if someone is in need of support or just a person to talk to.
“In and outside of the theater, this group has helped me so much. They have helped me learn in theater tech and in life. They have helped me survive this insane place called high school,” Carter said. “They have taught me how life can be hard, but more importantly they taught me how life can be fun and exciting. They are some of the nicest and most caring people I have ever met.”