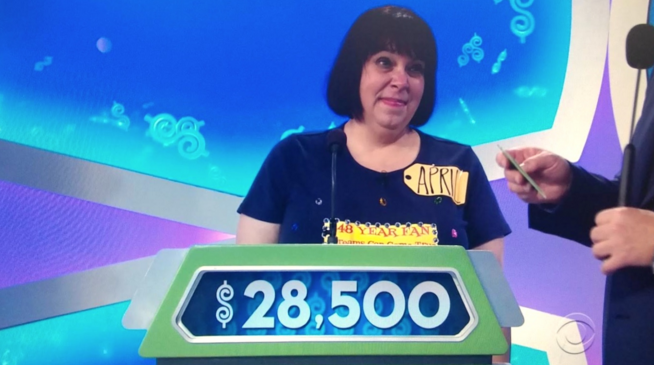 Alya Mehrtash staff writer
Library technician April Hunter has been a fan of “The Price Is Right” since she was a child. After 48 years of enjoying the show from behind her TV screen, she stepped in front of the camera, fulfilling her childhood dream as a competitor on “The Price of Right” live to win $31,000 in prizes.
Hunter recalls first watching the show when she was about 2 or 3-years-old with her grandma, with whom she lived at the time. Following her grandmother’s passing, Hunter found comfort in watching “The Price Is Right”.
“[My grandma] passed away when I was 8 years old, so watching “The Price is Right” reminds me of comfort and being with my grandma,” Hunter said. “Over the years, I remember watching it when I was home sick from school, or on a school break. That show is like comfort food to me.”
For Hunter, the show is emotion-evoking for both the contestants and the audience.
“I think anyone who watches it gets excited for the person up there, and you feel elated when they win, sad when they don’t. It is definitely a fun way to spend an hour,” she said.
For years, Hunter felt emotional on behalf of the contestants, but always hoped to one day be on the stage herself.
“I always imagined myself on that show and even had dreams about it. I was actually super nervous about ever going on, afraid of being disappointed by not being called to contestant’s row,” Hunter said. “It was just so exciting to be on a show that I have watched forever.”
Despite the anticipation of competing, Hunter overcame her nerves and turned her focus to the game.
“It was so surreal,” she said. “The atmosphere in [the live studio] is so weird…Strangely, I never felt nervous, like I would forget to say the right thing. I felt really focused.”
Hunter channeled that focus into the games on the show, winning a trip to New Orleans, a wireless speaker system and receiver, and a Mazda 3 in the showcase round. Her daughter, Lauren Hughes, was very invested in the show and was hoping her mother would win.
“It was thrilling. I wanted her to win so badly. When she finally did I was so overwhelmed with joy and happiness,” Hughes said. “Seeing her that happy really warmed my heart.”
Hunter admitted that even before the show began, her intuition was pushing her to believe that she would be called up to the contestant’s row.
“I had a feeling they would call me, and I even whispered to the producer, ‘First four’ when I spoke to him in line. I was actually annoyed [when] I wasn’t the first name called. I was the third person called,” she said.
The “surreal” experience on “The Price Is Right” was one that even Hunter, herself, had trouble believing at times.
“It was 90 days between the taping and the airdate, so at times I felt like it was a dream and didn’t happen. I had to actually touch the license plate frame they gave me to remind myself it was real,” she said. “It somehow felt inevitable, like I was destined to be there.”
To watch Hunter’s appearance on “The Price Is Right,” click here.