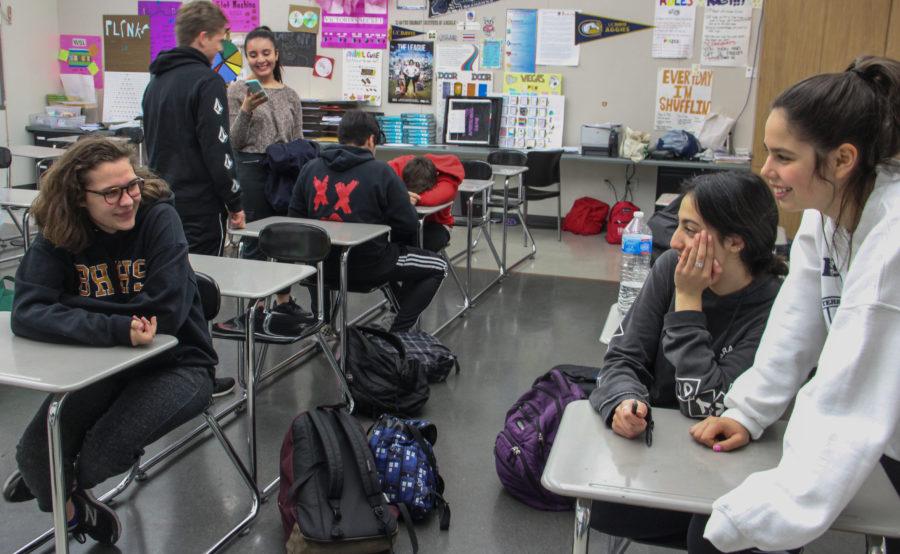 Stressing about the upcoming biology final, freshmen Eleanor Stahl, Maya Milstein and Leah Sarir discuss their study habits. "I was stuck on a biology topic, and they helped me understand and how to study the topic better," Milstein said. Photo Credit: Warren Jacobson

This post is part of the Beginning Journalism class’s final. Everything was 100 percent produced independently by the cub writer(s) listed below.
Candice Anvari cub writer
Warren Jacobson cub writer
Six periods, seven hours, one typical school day in high school. A new routine to adjust to as a freshman and a new atmosphere to be a part of for four years.  As incoming freshmen, many students deal with the ups and downs of adjusting to a whole new school. Freshmen deal with a new social and academic environment unlike the past years of school, while learning how to find new and different friends in a sea of unfamiliar faces.

Last fall, the adjustment from middle school to high school was significant for some students but was of little change for others. According to a survey of BHHS’s freshmen, 16 out of 31 responding students found their adjustment to high school to be difficult.
Freshman Sawyer Grijalva, who previously attended Horace Mann School, found high school’s social environment different from her middle school because of the students and teachers she encountered.
“At our middle school, we all knew each other. We were all…friendly with each other. But here [BHHS]…I don’t know half the kids in my grade and I don’t see a lot of people that I know, so it’s pretty different,” Grijalva said.
Grijalva realized that she didn’t remain close with some of her best friends from middle school once this year progressed.
“There was this one friend that I was really, really close with. Then, in eighth grade, we started…drifting away because we didn’t have any classes together. Then right now, we…don’t even really talk to each other…[but] I’ve made a couple new friends,” Grijalva said.
Freshman Kevin Manavi previously attended Hawthorne School. He realized that he was not able to see his old friends as much as he did in middle school. As a result of his classroom locations and the people he met in those classes, Manavi drifted away from those people.
“I don’t know what it is…a lot of the clubs I go to, there just aren’t a ton of people that go so I haven’t done…many clubs. I haven’t done any sports. The only… school-related extracurricular I’ve been doing is robotics, but I haven’t met a ton of people that way,” Manavi said. “Because everything is so far apart and because of how some people… specifically eat in a certain spot just so they’ll be closer to the next class, it gets hard to talk to your old friends.”
Manavi noticed that the social climate at the high school shifted since he started school in August.
“In high school, it’s more acceptable to trash talk other people,” Manavi said.
Grijalva was uneasy with her peer’s actions at the high school; especially, inside the girls’ bathroom.
“I’ll go into the bathroom…Sometimes…they’ll be people in there vaping and stuff that makes me kind of uncomfortable,” Grijalva said.

In regards to the academic struggles freshmen faced this year, Grijalva felt that second semester was easier in comparison to first semester.
“I feel like in the second semester, I’ve been more motivated to get better grades because they weren’t…what I wanted…last semester. I’ve been really trying this semester,” Grijalva said.
Manavi felt that his biggest academic challenges this year were within his honors classes.
“In the beginning of the year, I was in Honors Spanish ¾ and that was extremely difficult. I eventually dropped out of that, but still…the biggest challenge now, that I still had back then, is Honors Biology,” Manavi said.

Freshman Chloe Levine, who previously attended Horace Mann School, changed her study habits to meet the rigorous demands of high school.
“In middle school, I would glance at the book and I would get an A. In high school, you really have to know your stuff,” Levine said.
Freshman Sofia Kirkland, who previously attended El Rodeo School, changed her study habits and found a method that worked best for her.
“I have changed my study habits by making reviews as we do each unit. In this way, I can review past units throughout the semester so when it comes to finals or midterms I don’t have to study as much,” said Kirkland. “It takes the pressure off having to shove a bunch of knowledge into my brain last minute.”
In comparison, Grijalva changed her sleep schedule this year in response to her more demanding workload.
“I don’t really get a lot of sleep period,” Grijalva said. “So my ability…to not really sleep and also school…that’s been a double effect, so it’s…less sleep than I would normally get without work.”
Manavi’s feelings toward the high school as a whole varied throughout the year based on the difficulty of the day.
“There are some days where I think high school is the hardest thing ever, but there are some days where I wish I could go back to middle school,” Manavi said.