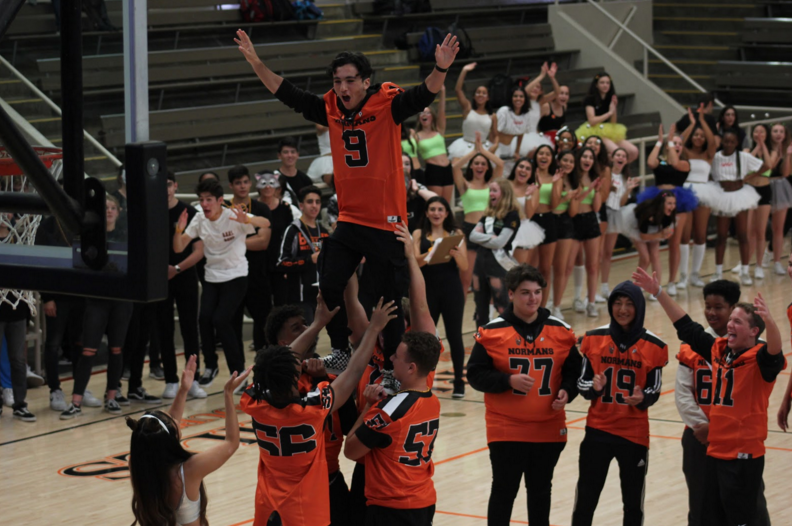 Alya Mehrtash staff writer
Norman voices filled the Swim Gym with their chants, teachers danced while wearing animal masks, student-athletes shoved their faces in whipped cream. ASB’s homecoming pep rally, which took place last Friday, was nothing short of eventful.
According to a Highlights survey conducted during the 2018-2019 school year, 81 percent of Beverly students felt that most Normans lacked school spirit. In an attempt to tackle this issue, ASB formed a homecoming pep rally committee at the beginning of the 2019-2020 year, led by Head Row President Maddy Nassirzadeh and Junior Row President Michael Newman. They worked with the administration to create an assembly schedule to include a pep rally for the entire student body. Members of ASB hoped that with the entire student body present, there would be an increase in school spirit.
“What used to be a norm at Beverly became unknown to the current student body,”  Newman said.“Since ASB is trying to tackle the issue of a lack of school spirit, we knew bringing back the pep rally assembly would be exciting and a cool way to bring something that used to be normal back to our school.”
The pep rally committee went through “a lot of planning,” according to Newman, to prepare for the first pep rally of the year. A key aspect of their preparation was their script. The script was “crucial” in ensuring that the pep rally was approved by administration and that everything ran smoothly.
The committee’s meticulous organization was recognized by other students as well.
“I liked how so many people put in effort in organizing and in participating, and it really showed,” sophomore Ella Revivo said.
To Newman, there were multiple things that stood out about this pep rally aside from the fact that it was the first pep rally assembly since the 2016-2017 school year. He not only acknowledged ASB and their work to organize the event, but also the crowd and the student groups that were involved in the pep rally itself.
“It was organized, well thought out, and creative. We involved various groups on campus and I’m glad we included Madrigals because I don’t think we’ve done that before at a pep rally. We had an awesome cheering crowd who was also respectful,” he said. “The pep rally flowed perfectly and everything was on schedule, so thankfully nothing had to be skipped.”
Many students in attendance also enjoyed the mix of representation of student groups in the pep rally.
“My favorite part of the pep rally was how student council was really involved and tried to promote more spirit in each grade level,” sophomore Mimi Kessler said.
ASB is now planning on holding multiple pep rallies similar to this one for other teams in the two upcoming seasons. To Newman, the most important thing about these future pep rallies is that they “are exciting and amazing like this one.” He felt that the homecoming pep rally was a success in the sense that more students showed signs of increased school spirit.
“Students were excited and it was obvious that some signs of school spirit were coming back. Students wanted to get involved and come onto the court, and a few did because of their excitement,” he said. “This pep rally definitely made students feel like we are in a high school with spirit, which is how we should always feel.”
[youtube https://www.youtube.com/watch?v=gdCZ98oeMSY]