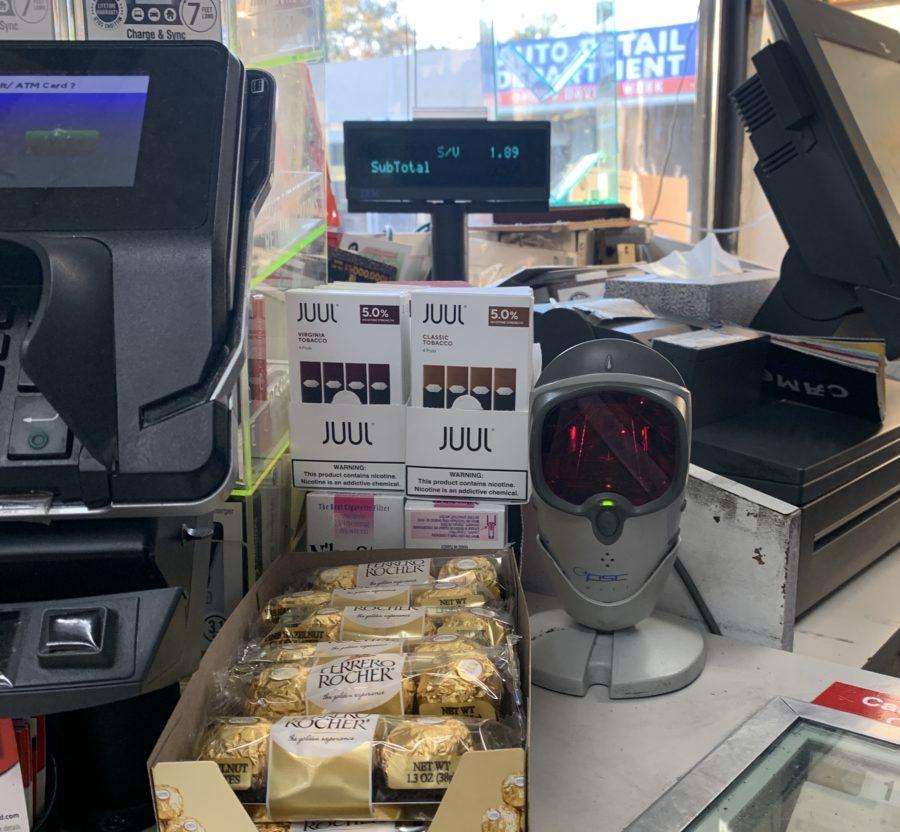 Click above to discover the impacts on vaping on all areas of the body.

When then-sophomore, Ricky Lee, attended his first Tobacco Usage Prevention Education (TUPE) conference last year, he was stunned to discover that e-cigarettes and other vaping products such as Juuls, Suorins and Stiiizy are counterfeited on the black market, sold to teens and can even explode in the user’s face or pocket.
To Lee and TUPE co-member, junior Joshua Katz, this seemed like a fluke. But now as over 1,000 people have been sickened and 21 have died from vaping related illnesses since early October, according to the Washington Post, they are both starting to worry about how many of their fellow classmates fall amid these statistics with the nationwide vaping crisis underway.
TUPE, a Los Angeles County Office of Education grant program which is normally just a conference funded by the state government, has been taken even further by the BHHS chapter through convincing students who smoke at the high school to quit by applying some of the knowledge that students learn from the conference, Lee said.
English teacher Jamie Marrs, who along with health teacher Heather Godin, oversees the progress of the TUPE program, said that as students like Lee and Katz use the skills they’ve learned from conferences past, the vaping crisis is “something to take advantage of” due to how widespread it is, and Lee agrees.
“As TUPE members, I think it gives us a reason why we should definitely step up and make videos and posters. It’s giving us a purpose why we’re doing this. It’s reminding us,” he said.
Although taking advantage of the epidemic spreads TUPE’s awareness campaign, Marrs said that the severity of the issue me her “more concerned for students at this school,” but now, they have more to point to in regard to truly spelling out the danger of vaping devices.
“These have formaldehyde in them, they have insecticide. It’s not this ‘don’t eat your Halloween candy until it’s x-rayed’ type thing, it’s real,” Marrs said.
Trying to prevent addiction, especially to nicotine, is “ideal” Katz said, and now that TUPE plans to make PSA videos and put posters up in the bathrooms and hallways, Katz is hoping that those steps, no matter how small, will open students’ eyes.
However, for Katz, his motivations to help his fellow students coincided with a pivotal moment in his life: his second cousin passed away from a drug overdose. Being in health class at the time, Katz said that it gave him “the opportunity to open up” and help his peers.
“My goal is to convey to my peers that using these harmful substances can really do terrible things to your body, and lead even worse [things]. I think seeing what it can do firsthand and seeing how hurt my family members were when my cousin died is terrible and I don’t want anyone to have to go through that,” Katz said. “I wanted to join a program where I can make a difference and put people back on the right track.”
Despite the myriad of statistics and personal experiences shared in the news and in classes, Marrs still thinks that it is a “huge challenge” to get the anti-vaping message across to students.
As she tries to execute her passion for student-led projects to help students in TUPE be innovative enough to debunk the “natural resistance” and “eyerolls” she faces upon trying to spread the word, Marrs said that it’s imperative to get students to realize that adults aren’t merely trying to “take their fun away” by denouncing vaping; it’s to keep people safe.
“They’re being taken advantage of in the same way that tobacco took advantage [of people]. But when you’re hearing that [from adults] it creates this resistance and I think that [these students] will have more of the literacy to get this message across,” Marrs said. “Getting to see students creating something that is from the voice of teenagers to teenagers means everything to me…My hope is that they can look back and say, ‘Wow, people used to smoke and think it was fine.’”
What matters to Katz more than anything is the number of kids that have died from the vaping epidemic, and to him that number will only be increasing–even at Beverly. Although the crisis serves as a “stepping stone” to heighten TUPE’s awareness and make a difference as soon as possible, Katz said that TUPE’s approach to the matter will remain the same.
“It destroys me to think that kids are dying. Juuling is a problem in high school. The last two years have been way worse,” Katz said. “Every time I go to the bathroom, there’s some kid smoking and avoiding class, and I don’t want to imagine them in a hospital bed, but, you know, that’s where they’re going.”
TUPE has big ambitions to alleviate this crisis, but Marrs hopes that TUPE takes the stance of a silent hero.
Although she thinks that TUPE hasn’t had a large enough presence on campus, she doesn’t think that it needs to be paraded. Her goal, much like Lee and Katz, is to produce a widespread “compelling” campaign, but in a way that’s not branded.
“I think that TUPE hasn’t had enough of a presence, but I think the point is to put the stuff out there without it being from a group. It doesn’t need to be associated with them, it’s not about them,” Marrs said. “It might be better so that people don’t make associations. It’s just a group of different minded kids coming together instead of being able to limit it.”
At the end of the day, however, for TUPE it’s about making a difference. And for Lee, the concept that it can start with one person is enough motivation to keep going.
“Thinking of how I can make a difference and how I can make posts certain videos to prevent and convince others from using nicotine and those related products, it’s just insane. Just thinking of how I can change something,” Lee said.