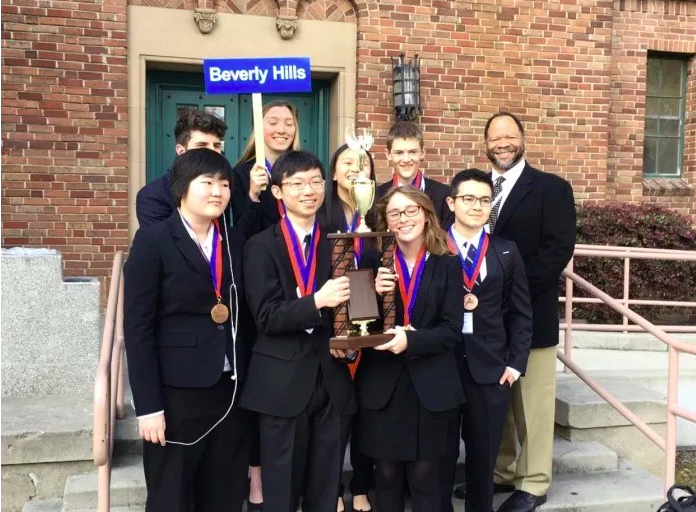 The Academic Decathlon team finished the first round of their first regional competition of the year at El Rancho High School last Saturday, Jan. 25.
During this part of the competition, the team of eight participated in what is known as “subjective subjects,” where they write an essay, participate in an interview and deliver a speech, all pertaining to this year’s theme, in sickness and in health, which explores the evolution of modern health and wellness.
The results of the competition will remain unknown until the team competes in the second round of the competition on Feb. 1. But, in regards to the first portion, newcomer senior Tim Villaflor ended up enjoying it more than he expected.
“It was my first time, and it was intimidating because everyone there [was] all confident [and] they seem[ed] smart. Everything was straightforward, nothing confusing and it was lots of fun,” he said.
Villaflor isn’t the only one who experienced pre-competition anxiety: Academic Decathlon advisor Ann Marie Fine said that amid intense preparation including class time sessions, outside of school sessions, subject tests, essays and impromptu speeches, the majority of the team “detested” the presentation aspect of the competition.
However, during the competition and after the fact, the team felt “confident and comfortable,” Fine said.
“They felt like they did a very good job presenting and speaking and being very comfortable. And I saw even [in the] last week up to the competition, they were exhibiting those characteristics, which was wonderful to see,” she said. “So, you see that there’s a lot of growth, right? And I would, I would say that pretty much characterizes this team.”
What really characterizes this year’s team is the fact that the majority of them are newcomers, but according to AcaDeca captain senior Adrian Lo, that wasn’t necessarily a disadvantage.
“I think what was really good was the fact that everybody kept a positive attitude throughout the entire thing, because that’s extremely important when it comes to things like speeches and interviews,” Lo said. “I think they learned a lot from the experience.”
The team has had to overcome a few challenges to reach this point: at the start of the season, AcaDeca struggled with recruiting members of a certain GPA to meet competition requirements, and now that they have a solid enough roster, the size of the team is something that impedes their studying schedule.
Regardless of the challenges, Fine recognizes that this is a year for “growth” for the team.
“I think for the students, they just want to do the best that they can. They realized that it is a growth year. [Last year], they had a lot of superstar students who brought them to state. This year, it’s a growth year, [and] we’re just trying to do the best we can. If we do make state that would be fabulous.”