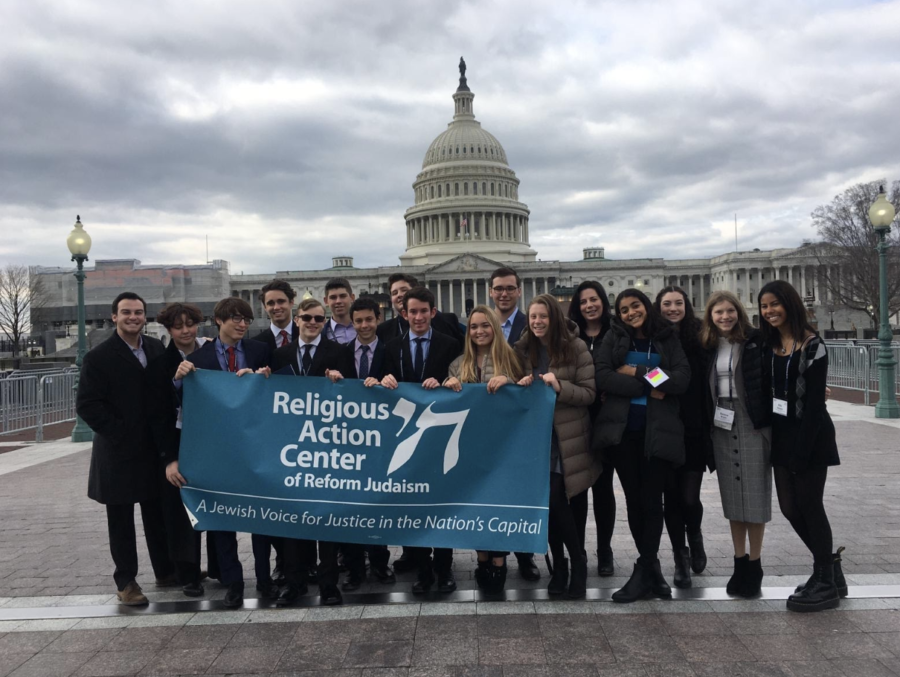 Emma Newman staff writer
Jewish students lobbied for change and learned more about democratic issues during their visit to Washington, D.C, which was sponsored by Temple Emanuel, by talking to California representatives and attending different classes,. Every year, students attend trip to actively support liberal causes through the Religious Action Center, which is headquartered in the nation’s capital. This year, the trip took place from Jan. 24 to 27.
The eight Beverly students in attendance took classes about democratic issues, such as the Palestine-Israeli conflict, climate change and gun violence prevention. During the final portion of the trip, students delivered speeches to different representatives of the House and Senate, such as chiefs of staff or assistants of congresspeople and senators.
The main purpose of this trip was to learn about these issues in relation to Judaism.
“We’re connecting modern-day issues with Jewish text and how that influences us as people,” junior Eva Levin said.
The trip began with a lecture about voting rights, which included information about individual experiences with this issue.
The anecdotal aspect of classes, like the lecture, resonated with sophomore Sienna Wolfe, who said that the lectures were her favorite part of the trip.
“It was really interesting to get different perspectives on all these issues that we know about in the news, but we don’t really hear people’s in-depth stories about them,” Wolfe said.
As this was her second time on the trip, the classes that Wolfe took were also at a more advanced level. These classes involved experiments and new information that were not present during her freshman trip.
However, for Levin, who has also been on the trip twice, learning about politics and religion was not the only important part of the experience. In fact, Levin found that the classes were her least favorite part of the trip.
“There’s times during the sessions where I almost fall asleep,” Levin said. “They’re trying their hardest to make it interesting, but when you’re with a bunch of your best friends in one hotel, there’s other stuff you’d want to be doing [rather] than sitting and learning.”
Instead, the social aspect of becoming closer to the other people who were on the trip was her favorite part.
“I just opened Snapchat and I have a bunch of texts from people I went on the trip with, and we’re already [saying,] ‘I miss you so much,’” Levin said. “I love that aspect of making friends and getting closer with people I wasn’t friends with before.”
This emotional bond was particularly special, Levin said, because of the large number of seniors on the trip.
“It’s their last one [and] there was a little bit of an emotional connection,” Levin said.
Throughout the conference, one of the most note-worthy aspects for both Levin and Wolfe was the current political climate. Wolfe was upset by a pro-life rally that took place, and  Levin was interested by the impeachment, which she thought was “historic, to say the least.”
In fact, Levin delivered her final speech to the assistant of California Senator Kamala Harris, who is one of the senators at President Trump’s impeachment hearing. Wolfe also delivered her speech to a representative of Harris, the chief of staff.
Every student’s speech revolved around Bill S561, which is the Voting Rights Act. of which Harris is a co-star.
Each speech had to include an introduction, a segment on why Americans care, a connection between the issue and Judaism,  and a proposal for the recipient of the speech.
Harris’s assistant was the same person Levin spoke to last year, so they already had somewhat of a rapport. This made for a “really nice” experience, Levin said.
Levin and Wolfe used their speeches as a way to both give thanks and encouragement for Harris to reintroduce the bill to congress if it was unsuccessful.
“Since we’re from California and all of our representatives and senators are democratic, they had already co-sponsored all the bills that we were lobbying on,” Levin said. “It was more [of] a thank you.”