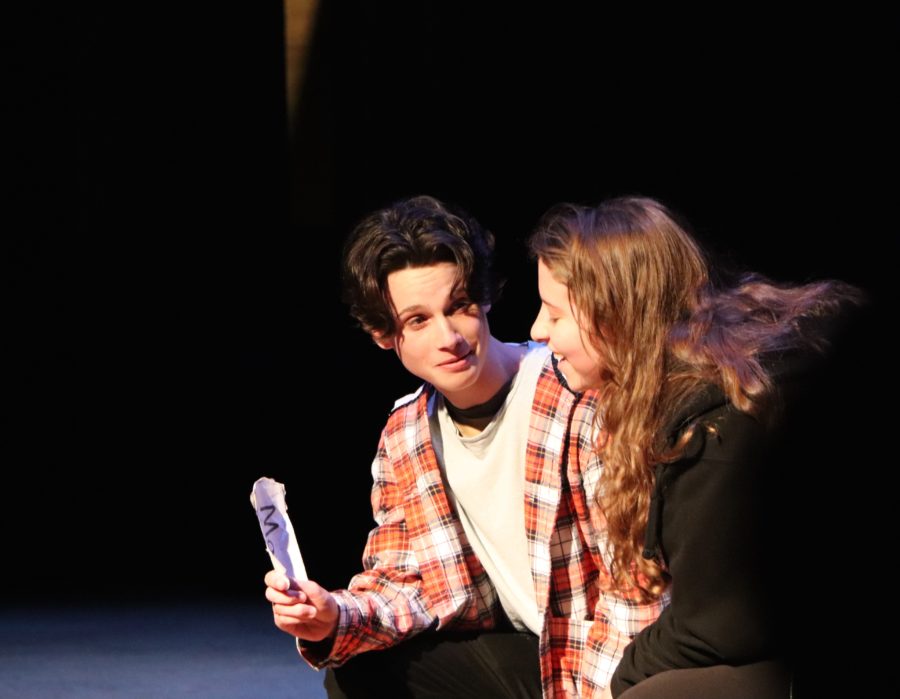 Emma Newman staff writer
Drama Lab’s One Act plays consist of six original pieces written, directed and casted by students.The show will take place on Feb. 4 and Feb. 5.
Each play is 10 minutes long with three to six characters, and the themes range from comedic to somber.
To write the plays, theater students received help from a playwright from Northwestern as well as their fellow peers for five weeks. After the plays were drafted, the class read and made comments on the plays before they were selected for the showcase theater director Kaz Chandler.
“Before winter break, we chose the six that fit our actors the best and our needs the best, as well as the content [that] was really appealing to the kids,” Chandler said.
The plays chosen were written by sophomore Miles Platt, senior Victoria Hirsh, sophomore Emma Maurer, sophomore Julien Collet, sophomore Ryan Hodor and sophomore Taylor Fuchs. Some plays, like Platt’s narrative about a play someone performs in their imagination, hit a more lighthearted note. Other plays, like Maurer’s play about a heart transplant, are more emotional.
Hodor’s play, on the less dramatic side, is about a man who is making an over-the-top movie is designed to make people laugh.
“I noticed a lot of plays were sad and serious, or were pushing social agendas,” Hodor said. “There’s nothing wrong with that, but I just wanted to make something that…everyone could enjoy and make it as fun as possible.”
The play is focused on a character named Will, played by sophomore Eli Okum, who works at a “boring” office job until he decides he wants to be a famous actor. After taking the first job he sees, he ends up being a part of a movie with a director who says “stupid, bad, offensive stuff.” The director was inspired by Tommy Wiseau, a director known for making the notoriously disliked movie “The Room.”
Fuchs’s play also revolved around people in a simple office job. But, unlike Hodor’s play, it is based on the imagination of the office workers. It shows the adults, who usually work in uninteresting jobs, turn into children once lunch break arrives. The majority of the play shows the office workers playing as children.
“The underlying message is that I wanted to show that even adults have an imagination and never to let go of your imagination because you’re just going to be bored and boring,” Fuchs said.
After the directors of these plays coordinate their production needs and construct their sets, the One Acts will move into Theater 40 on Feb. 3, unlike the previous Salter Theater productions.
This change in venue is not the only difference between this set of One Acts and those of previous years. In fact, Chandler adjusts the performance every year in order to improve.
“We see things that don’t work the year before, and I’m very, very clear telling them, ‘Please make sure you don’t fall into this pattern because it doesn’t work,” Chandler said.  “One of these patterns is if you write the play like a screenplay, like a movie, we don’t have that ability.”
The main difference, though, is the fact that the individuals plays are originals and, therefore, will never be seen anywhere else.
“Drama Lab has worked really hard on writing all their plays,” Fuchs said. “They’re all original, which is really cool [and] most likely, you’re not gonna see anything like this because it’s all from us.”
Tickets are $3 without a GoCard and free with a GoCard.