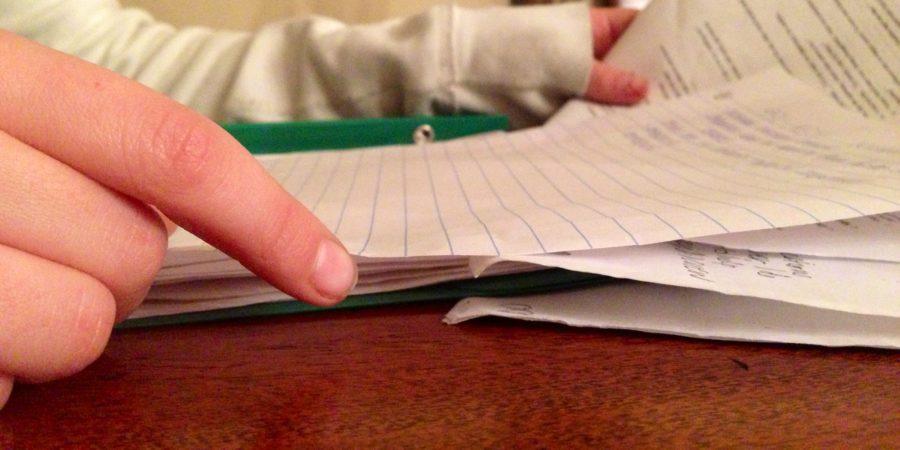 Martina Bocchi sifts through papers containing French poems. Bocchi was looking at different poems to use for her performance at Cabaret.

Nastazia Moshirfatemi, cub writer
Sitting in a room, listening to kids speaking a beautiful yet unfamiliar language, while eating mouthwatering desserts, is the paradise of going to the school Cabaret.
Cabaret is an evening event that takes place in the school cafeteria on May 22. The evening consists of two halves; the first half is for the performances and the second half is for the awards program.
In the first half, students that are part of the French program will be reciting and performing French songs, dances, skits, poems and instrumental music. The second half will be dedicated to giving out awards to the best French students in all the classes, and medals will be given to the national French contest winners. French food will also be served before the performances and during intermission.
“We like to get students involved in it as much as possible,” The Foreign Language Dept. Chair Corinne Carlson said. “It basically stimulates everybody’s motivation for French.”
Cabaret allows students to share talents, show off progress in French
The Cabaret is meant to introduce French culture to the high school. French Club puts great effort to get as many kids involved, either performing or volunteering. Freshmen Martina Bocchi is participating in Cabaret by reciting a famous French poem.
“I have a poem in mind, but it’s a surprise so you’ll have to wait until May 22.” Bocchi said. “I’m actually really excited but nervous at the same time because I have never performed in front of so many people, and I heard there is going to be at least 300 people in the audience.”
The audience will include parents, teachers, board members, administrators, and occasionally a member associated with the French government. Last year, French Club got the vice consul to come to Cabaret, and they are expecting the actual French consul to come this year. Bocchi describes this happening as exciting but worrying.

“I think it’s great that the French consul might be in the audience this year, I hope he is impressed by me. My only worry is if I mess up and embarrass myself. Maybe I’m overreacting a little bit, but my goal is to practice a lot so I can prevent something like that from happening.” Bocchi said.

The performances aren’t the only thing holding the event together, the volunteers play a big role in Cabaret. Although not everyone may have the guts or the talent to perform on stage, they still have a chance to volunteer by decorating, publicizing, ushering, working behind the scenes and selling food.

“I’m going to be decorating, publicizing, and selling food. I love helping out during events like these because I get to, not only experience what the audience experiences, but I’m also a part of the whole event,” freshman Parmis Shafaghiha said.

For the students who are not participating in Cabaret and don’t want to perform, French Club encourages them to sign up as volunteers, because not that many people think it’s a credible opportunity.

“All my friends keep asking me why I would volunteer for Cabaret, I simply answer by saying something along the lines of ‘because I enjoy helping out and getting involved.’ My friends think its silly to sign up to volunteer because they think that it is not  an important job, but it really is,” Shafaghiha said.

Cabaret has grown larger every year. Although it is free to get in, within the event, new activities such as opportunity drawings, which cost money, have been added, to not only make Cabaret more exciting, but to raise enough money to provide for the French program.