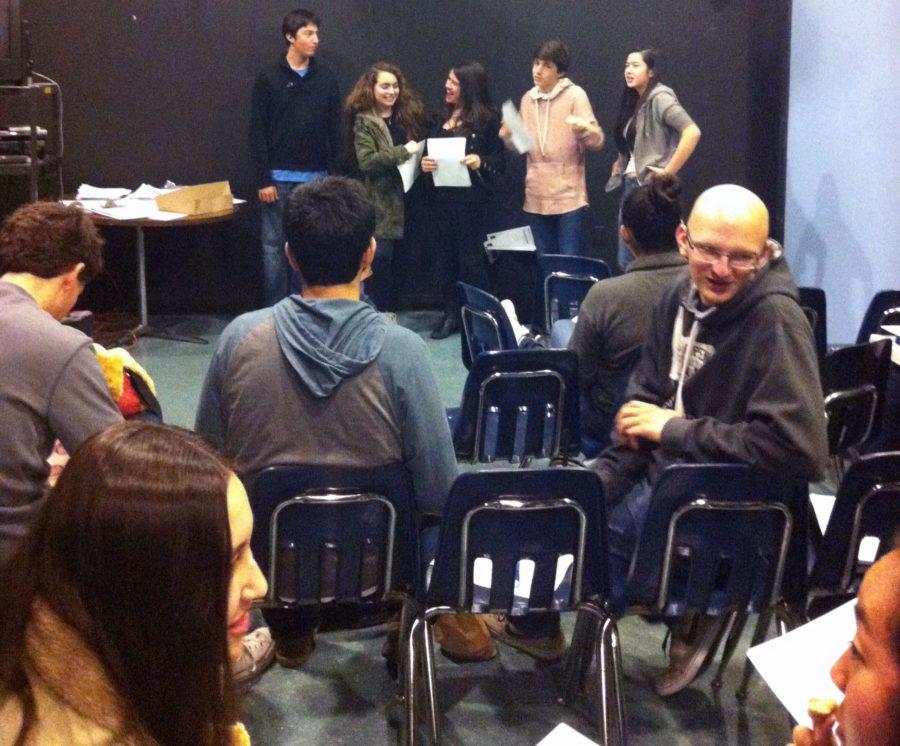 Film club presidents (from left) Ginsberg, Rosenberg and Gordon make Oscars predictions at their last meeting on Tuesday Feb. 21. The presidents printed out handouts with the nominated films for the club members.

Dani Klemes, cub writer
For the aspiring Spielbergs and the doting movie snobs, film club offers a welcoming environment where members are free to discuss anything ranging from movie trivia to upcoming award shows. Led by senior presidents Natalie Gordon, Yaron Ginsberg and Izzie Rosenberg, film club establishes a close-knit community where opinions are valued and creativity cherished.
Although the club centers mainly around open discussions and small movie screenings, its main goal this year is to produce and create an independent movie in order to help its members gain experience and offer them a first-hand look at what really goes on behind the camera.
“My main goal is to have students connect with other students who really enjoy film and want to make movies,” Gordon said.
Once the members have assembled and the room is full of enthusiastic voices, the club leaders like to challenge everyone’s film knowledge.
“We usually start off by playing Oscar trivia and discussing films that may win Oscars, but we generally discuss new films or classic films,” Gordon said. “We talk about those for a few minutes and then turn it into a discussion about films we want to make.”
When the club leaders begin to make films, they enter a whole new realm of responsibilities. Not only are they in charge of directing the meetings, but they’re also responsible for acquiring proper funding and equipment.
“We’ve already made two films which we did with last year’s film club, so we kind of have a pattern of where we get the equipment…usually we either bring our own cameras from home or we use equipment and lights from KBEV,” Gordon said. “We go on a lot of locations, we get actors from our friends and we put out casting notices, we really go all over the place looking for people to fill the parts.”
As for cutting clips and piecing the movie together, simple editing software is a helpful shortcut.
“On a Mac you can just use iMovie to edit,” Ginsberg said.
Contrary to the whopping budgets that professional filmmakers juggle, film club members use their own loose change and solely what they have available to them.
“It’s all kind of internal, we don’t really use fundraising,” Gordon said.
“It usually doesn’t cost that much, but when we do use money, it’s all out of pocket,” Ginsberg added.
While the main reason for producing the movie lies in the desire for experience and hands-on knowledge, Gordon hopes to enter it in the film festival this year.
“We have to see where it goes…if it ends up as good as we’re hoping, then definitely festivals,” Gordon stated. “Our main goal is to have fun while making it.”
Fun is an understatement. For junior Allison Klemes, film club is a place where she can share her passions with other avid movie-goers.
“I love making films and I think that being able to work with other people would be an amazing experience,” Klemes said. “Just learning new techniques would be awesome.”
For many members, film is not just a hobby. Most of them plan on pursuing their moviemaking dreams and attending film schools.
“I joined film club because I’ve been interested in film for a long time…I want to be a director and possibly a cinematographer and I think it’s nice to surround myself with people with the same interests as me,” Klemes said. “If I can, I plan on putting this film in my college portfolio.”
While some club members are close to breaking into the entertainment business, others are still rookies learning the basics about the art of film.
“It’s sort of a melding of different levels of experience coming together,” Gordon stated.
Despite the diverse group of kids in the club, the presidents wish to draw more members in.
“I would like to bring more people into the club and we’re currently thinking of ways to do that,” Ginsberg said.
“It’s a really good core group, but I think expanding the membership would be a good goal for next year,” Gordon added.
Club presidents initiate meetings with limited support from advisers
As for leading the club and directing the meetings, the presidents are essentially on their own.
“Mr. Carey [the club adviser] completely leaves it up to us,” Ginsberg stated.
With all the freedom and independence film club is given, it’s no wonder the room is bubbling with creativity.
Film club meetings are every Tuesday at lunch in the KBEV room and more information can be found on its Facebook page.