‘GameStock’ mania: Was GameStop worth it? 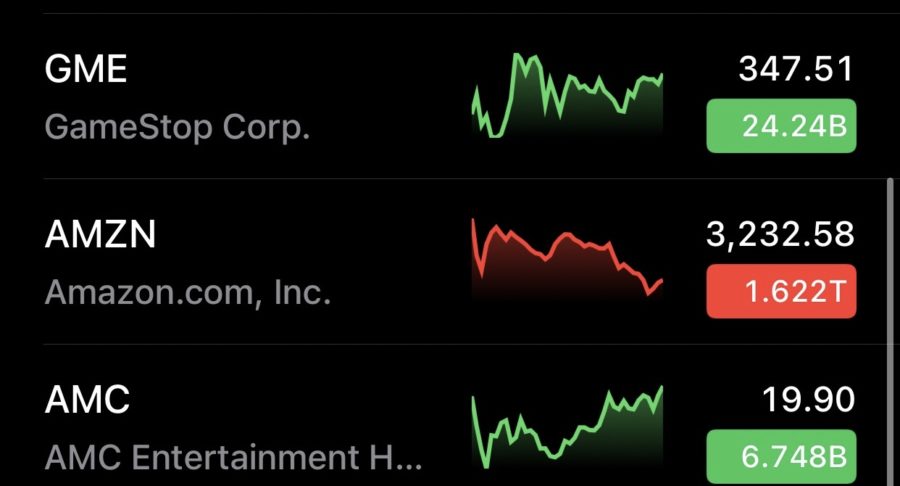 Redditors banded together in buying GameStop shares, and small investors won over financial giants such as Melvin Capital. People made fortunes over night.

However, they lost them just as quickly.

At GameStop’s highest peak on Jan. 28, the share price was $483. On Feb. 20, the stock was worth $48. The GameStop mania propelled by memes/social media, destroyed approximately $27 billion in on-paper wealth.

“If someone was ignorant or naive enough to buy into GameStop at the very peak thinking it would be going up, was [the type of behavior] that led to the Great Depression,” social studies teacher Dan Moroaica said.

As GameStop peaked, a lot of small-time investors/Redditors lured by the social media frenzy lost thousands of dollars. Some people already had money from GameStop, but didn’t sell at the peak. These people missed out on the chance to make even more money.

“I sold GameStop really early on so I made about double the profits, but I didn’t ride all the way to $400. I wish I could have. It’s too risky for me,” junior Jayden Bulexa said.

Some students saw the skyrocket of the price in GameStop, and invested in it because of the social media craze.

Freshman Amir Mehrtash had seen GameStop “all over social media”. With help from his father, he bought one share at $293. Mehrtash was asleep when his father woke him up asking if he should sell his share for him. His GameStop share was sold at $397, soon before it hit peak price.

Mehrtash used Fidelity to invest in GameStop, instead of the controversial app Robinhood. Robinhood restricted trading of “certain securities” (including GameStop) causing a crash in the stock market.

“These small groups of Redditors gave the world a chance to make money off of something so small like a share that became so expensive over the course of a couple days,” Mehrtash said. “They got powerful people to notice them. This was a big win for a lot of people that are interested in stocks. If people get together, they can really make a change. Anything can happen.”

For Moroaica, investing in GameStop had a whole other meaning. Moroaica didn’t invest at the peak, but rather wanted to invest when “things calmed down”. He invested in GameStop when it hit $60.

“I really do believe that if you invest in the stock market, you should invest in companies that you want to see do well. I’m a huge video game and pop collector. GameStop is something that I’ve always supported, so it kind of made sense for me to finally also buy stock in it,” Moroaica said.

Moroaica used Ameritrade to invest in GameStop shares, and has “some shares” in Robinhood.

On the topic of the crash due to Robinhood banning stock sales in GameStop, Moraica said that it is, as far as he can tell, “illegal.”

“I could see why they did it, but I don’t think they should have done it, considering some brokerages did not do what Robinhood did. And considering that Robinhood has links to other hedge funds, I think they did all these actions to benefit the hedge funds. I saw a lot of people lose money as a result of their actions,” Bulexa said.

Bulexa enjoys investing in stocks regularly. His portfolio boasts shares in AMC Theatres, General Electric, pharmaceutical companies, Rolls Royce, Tesla and Twitter. He has a “limited amount of money” he can use from his parents. As a consistent small time investor, Bulexa is one of the few people who thinks some good came out of the GameStop mania.

The GameStop frenzy also led to a growth in knowledge about the stock market.

“I do think some good came out of it. People are more aware of hedge funds and I think hedge funds will be more weary about going full-force without any kind of headway,” Moroaica said. “I do think that people are more aware of the stock market and aware of just how much power they can hold as individuals working together. In the end, the congressional hearings are hopefully going to bring about some reforms.”

What happened with GameStop likely won’t happen again, since markets are like a “learning machine” and will learn from their mistakes. Hedge funds will likely be more careful about “shorting” companies like GameStop.

“It’s only going to happen once,” Bulexa said.