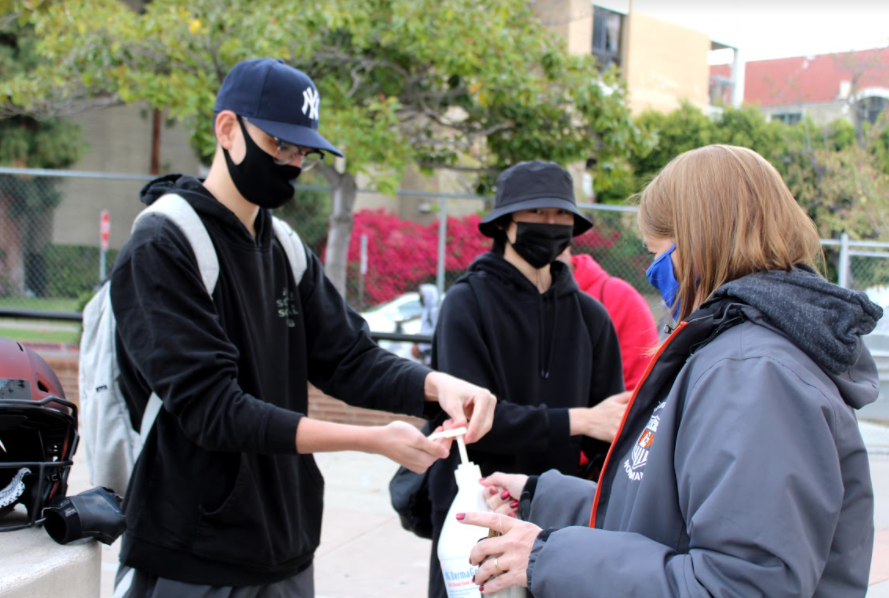 Photo by: Will Harris. Student athletes get sanitized by athletic trainer Coleen Davenport after their daily health screening survey has been checked.

As COVID-19 cases began to decrease in the Los Angeles area, in-person practice for athletics continue on campus, with safety protocols strictly enforced.

Sports such as football, soccer, softball, basketball, tennis and volleyball practice at least twice a week on campus. In order to ensure the safety of all teams, the high school implemented safety protocols for all athletes. Student athletes must fill out a Daily Health Screening on Parent Square for each day they are on campus, then report to school with their masks on, get sanitized,get their temperature scanned, and enter their designated sport area.

“The precautions are things like trying our best to distance [ourselves] and stay as safe as we can while we do our thing. I think it is safe, but the school can only do so much from inside of the school. It’s also up to the kids to stay safe outside the school,” sophomore Peter Lojdl said.

“I feel that practicing has been more efficient because the team understands that we don’t have that much time to play around and the protocols are just a reminder of that,” he said.

Softball player junior Sawyer Grijalva feels the protocols installed are a “kind of reduction,” because of the overlap of other protocols like “wearing a mask and staying six feet apart.”

“Our practices are always very spaced out. The only time I ever feel like we’re kinda close is when we’re in the batting cages, but even then we’re pretty spaced out. Coach Vonzie is doing really good keeping groups separate, having rotations, and [he’s] just very clever with how he’s having us do our drills and stuff,” Grijalva said.

Grijalva noticed that most students are obedient with following the guidelines.

While sports may look different this year, freshman Elena Serrano feels her teams are still the same, despite all the protocols in place. Playing both girls soccer and softball, Serrano believes the sports experience she is receiving currently is “pretty much” what she had envisioned for high school sports.

“It’s really fun and I feel like we’re still getting the same experience of being on a team; I get that social aspect,” Serrano said. “I’m really enjoying that part.”

“You feel less like a team. There’s this constant reminder to be separate, stay six feet apart, back up, and it’s hard to interact and have a conversation to get to know your teammates when we have to be so distant,” Nassir said.

However, Nassir understands the protocols are necessary for the health and safety of others, even if it may be hard to connect with others.

“I get it, it’s for the safety of everybody. Wearing a mask really doesn’t bother me, I really don’t feel it. We have to do it. Obviously, we don’t have a choice, but it’s okay because we have to keep everyone safe. We do it because you gotta do what you gotta do,” Nassir said.

For others, wearing a mask can get a little tiring, especially during intense practices. Junior Danny Geiger feels football practices with the new safety protocols can be tough and the requirements often cause him to remove his mask for a short period of time.

“When you’re running and you’re out of breath and stuff, having a mask on makes you feel like you want to die because you get no air. Sometimes we’re forced to take it off [when it’s hard to breathe] , but for the most part we keep it on. It’s definitely different, [wearing the mask] is like a weight on your shoulder,” Geiger said.

Besides feeling restricted when wearing a mask during practice, Geiger also feels his team is restricted in what they can and can’t do.

“There’s a lot of things that we just can’t get into, like proper tackling techniques that a lot of our freshmen don’t know because they’ve never played football. These are fundamentals that I think everyone needs to learn because it’s a big part of football. Obviously if you don’t know how to tackle or get someone on the ground, you’re not going to play good. We can’t even practice that,” Geiger said. “Half the kids have never even put on a set of shoulder pads ever or practiced tackling someone. It’s definitely challenging.”

While it may be difficult to adjust to the situation, Geiger is still grateful to have the opportunity to practice as a team in person.

“Honestly, I love it, especially with all the stress of classes and work. That time period [when] we have practice, it’s the time that we go to the field and don’t think of anything else,” he said. “It’s like your safe place, there’s no stress, you don’t worry about school or anything, you just go out and have fun.”

Like Geiger, Alex Manavi, a junior on the boys soccer team, feels that being able to take a break from school is well needed after a day of online learning.

“I’ve been really really happy to go back and be able to play. Since online school, your day kind of morphs all into one. You have school and then you just literally sit in the same spot and do homework,” Manavi said. “So, it’s really nice to have a break where you exercise and get out and see your teammates, I’ve been really happy so far and I’m really excited to get back to competing.”

The adjustment to in-person soccer practices with the safety protocols installed was not difficult for junior Manuela Torres, who felt the transition went smoothly.

“It went a lot easier than I expected it to be. It was pretty easy to just wear the mask and try to stay distanced. The drills were just like normal drills, so it was pretty nice to just get back. It wasn’t that hard to adjust,” Torres said.

For junior Dan Menache, the protocols remind him of the priority the school is placing on the health and safety of their students.

”After attending a couple football practices with all of these protocols, I feel completely safe on how the school is handling our safety, I believe that these are enough protocols,” he said. “I think that nothing much has changed in keeping kids safe; it seems to still be the number one priority for all of the staff working on campus.”