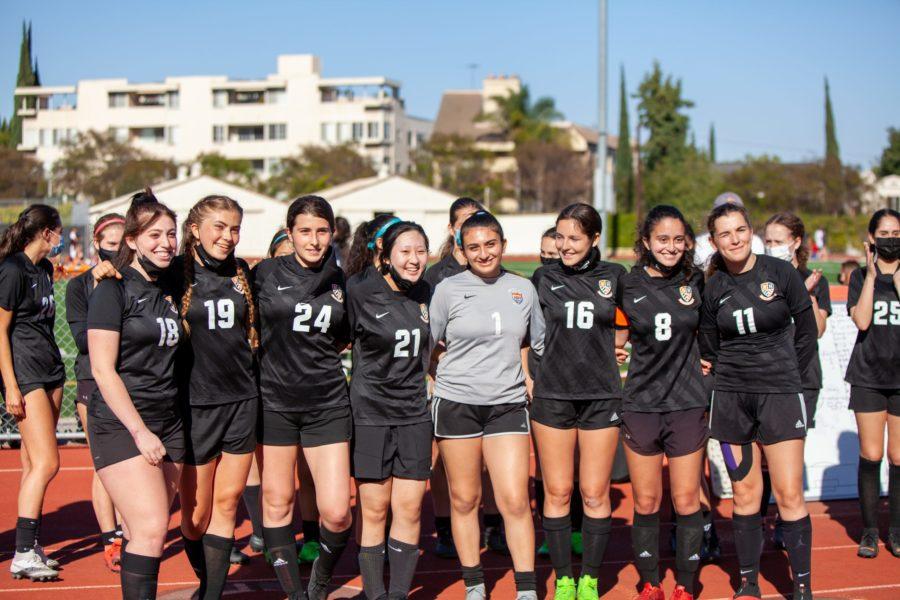 In a game riddled with free kicks and sweaty faces, the girls varsity soccer team beat Notre Dame Academy 2-1 on Monday, April 19. Before the last home game of this season, fans and players alike took time to honor the eight graduating seniors on the team.

Seniors Eden Bechnainou, Esther Goldberg, Maryann Han, Alya Mehrtash, Nahal Sarafian, Rebeca Sanchez Solana, Sara Schwartz and Yasmin Kamara were greeted with orange and black decorations along the fence as they walked onto the field. Each senior received a personalized poster decorated by their underclassmen teammates. Click on each link above for interactive photos of the players and their posters.

Team coaches participated as well. Coach Michael Sun kicked off the festivities with a speech before the game, thanking the senior players for their courage in this “difficult season.” Right after his speech, Sun called up the seniors one by one. Each girl then walked up to coach Ryan Franks, who handed seniors a rose as parents and friends in the stands cheered.

The night wasn’t all fun, though. The intense game followed immediately after the ceremony, and the Normans were on the ball from the start, playing with strong offense.

The first half was marked with a burst of energy at the very beginning of the game that petered off as the sun set behind Century City. The Normans defense was fallible in some areas, but proved themselves as the pressure on them increased. Both offense and defense made a few evident footwork errors, a symptom of nearly a year without on-field practices. The Normans lost their aggressiveness as the first half progressed, but their hustle remained consistent, which was rewarded with a handful of shots on goal. The first goal came with three minutes left in the first half. Sophomore Danielle Hollander scored after a breakthrough in Notre Dame Regals’ defense gave her an opening to kick the ball in. The half ended soon after without any incident.

The Normans entered the second half with revitalized energy after Hollander’s goal. Fourteen minutes after the half began, co-captain Goldberg scored a goal off a corner kick and raised the score to 2-0. The team continued to make more passes and improve communication. Despite Norman’s sturdy defense, Notre Dame Academy scored one goal 23 minutes into the second half, which caused the Normans to amp up their energy and finesse. Three minutes left in the game, Goldberg received a yellow card for pusing a Notre Dame player from behind. Still, the team continued. As the big scoreboard inched closer to zero, the score remained 2-1. The energy of the players, on and off the bench, was palpable. The stands erupted in cheers as the referee blew the final three whistles of the game.

“It feels awesome,” co-captain Han said. “For this win, all of the team worked really hard so it was well-deserved. We worked our butt off playing the entire 90 minutes, so it feels good to play.”

To Han’s fellow seniors, this win means just a bit more because of the night’s context.

“I remember the past three years of senior nights. I would think, ‘Wow, these girls are so big,’ and now we’re there,” co-captain Schwartz said. “It’s like, ‘Wow, I cannot believe this,’ and we won! Which makes it even that more special.”

Co-captain Mehrtash also described the game as “special,” and added “bittersweet” to her description. The air of finality surrounding the game caused her to reflect on her four years on the team and look forward to her future.

“I honestly love this team so much. Definitely one of the most important parts of my high school experience. Knowing that these are the last few games is really sad, but I’m also excited to be doing it with this group,” she said. “When I saw the two posters they made for me, I honestly wanted to cry. It means so much to know that it’s honestly like a family here and everyone loves each other so much.”

Her teammate Bechnainou joined in.