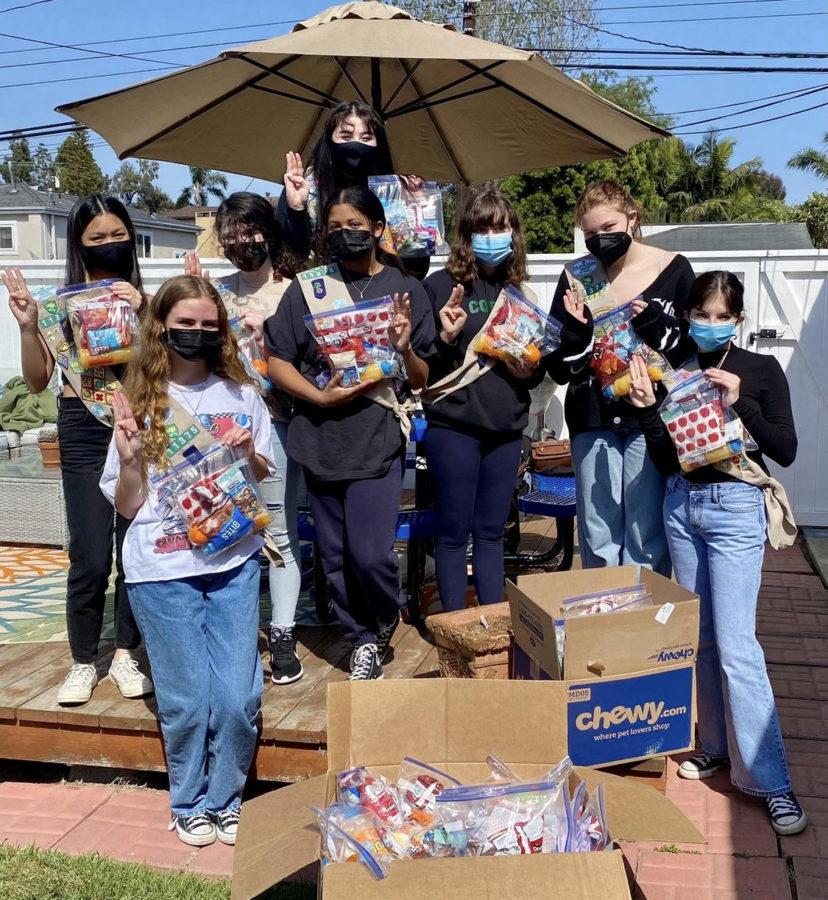 Teenagers volunteer for Safe Place for Youth as a way to help the homeless. Photo credit: Leia Gluckman

Senior Leia Gluckman, with help from her mom, Judy Friedman, first started working to combat homelessness in youth populations when she was two years old. Fifteen years later, Gluckman and Friedman are still working to address the issue.

The mother-daughter duo do this by volunteering for Safe Place for Youth (SPY), an organization that works to assist and empower homeless youth, specifically in populations ages 16 to 24. The organization works to give services to these young adults, regardless of their circumstances, while simultaneously providing them with a community.

Experience at Safe Place for Youth

Friedman met the founder of SPY, Alison Hurst, before the organization officially started. Hurst, along with volunteers like Gluckman and Friedman, worked to provide homeless populations with food and clothing before formally creating SPY in 2011.

After meeting Hurst, Friedman, who now serves as the vice president of SPY’s Board of Directors, decided to volunteer with her children in order to expose them to homelessness.

“I was looking for a way to get my kids comfortable being around people who were experiencing homelessness,” Friedman said. “Allison was a friend, and she really needed help and she was perfectly okay with having JJ and Leia coming into the space and handing out food and toiletries, and so it was a very good way for us as a family to do something together.”

Development manager Andrea Murray, who is responsible for “activating” community individuals and partners who are interested in joining SPY and working with the youth, started working for SPY because of her experience witnessing homelessness within her own community.

“I know several youth who, unfortunately, from high school and on, started experiencing homelessness in the valley. So, seeing that and also seeing my parents and other friends’ parents, sometimes welcome a youth into their home like a friend of a friend or a friend to have a place to stay, you grow up knowing that this is a crisis, and that we need to do something to help,” Murray said.

When she initially joined SPY, Gluckman handed out supplies and would help out with arts and crafts. Now, she serves as a member of the Next Generation Board for SPY.

Besides having an elevated position, Gluckman’s age has allowed her to connect with the youth she works with in a greater way, as they are now her peers.

“I realized a few years ago that I finally hit the age of the youth, so I was no longer the five year old teaching them how to do duct tape art and I was actually their age and able to have more meaningful conversations,” Gluckman said.

As a volunteer for the organization, Gluckman has learned that helping often means talking to homeless youth to see what they need.

“Safe Place for Youth taught me that the best way to help people is to ask them directly what they need,” Gluckman said. “I spoke to all of the youth and I asked them, ‘What can we actually do that would be most impactful? How do you want to be helped? What do you want from us?’ and everything stemmed from there.”

Friedman also views this method of combating homelessness as a particularly special aspect of SPY.

“The approach is so unique because it’s so empowering for them, and it’s so based on what their needs are, as opposed to us coming in [and] telling them what they need. It’s an incredibly inspiring and rewarding place to be,” Friedman said.

SPY during the pandemic

During the last year-and-a-half, Friedman has noticed an uptick in homelessness as a result of the pandemic.

“I think you can look outside and see how bad it is. It’s always horrible, but particularly during the pandemic,” Friedman said. “As they’ve been going around trying to clear up these cities, there’s no place for people to go. I think people are seeing that it’s a much bigger problem.”

At the same time, according to Friedman, COVID-19 has forced Safe Place for Youth to make adjustments to their structure. Most of these changes have made SPY headquarters a less “open” place.

Despite the changes that the pandemic has brought, the organization has still been able to create new projects. Currently, SPY is working to expand their location to include housing for homeless people, a project that Friedman finds particularly rewarding.

“All the services that we are able to provide are spectacular and amazing, but if you don’t have a safe place to sleep, there’s only so much that we can do,” Friedman said. “I think once our housing is built and we actually can have a true community that’s safe, that will be the greatest of everything.”

Gluckman also has worked on this project, as she views it as one of the most important steps toward combating homelessness. However, because of her experiences with these individuals, she believes that solving the crisis requires a more complex solution than housing.

“Somebody asked me, ‘If I gave you a million dollars to solve the homeless crisis, what would you do?’ and my initial response was homeless housing, and then my second one was, ‘Actually, you ask the youth first.’ Some people, they want to live on the street,” Gluckman said.

Friedman agrees that providing services like housing will not entirely eradicate the homeless problem. Instead, she thinks that the way to address homelessness is to get to the “root of the problem”.

“All of the other issues in society are contributing to the crisis of the homeless population, whether it’s racism, sexism, [or] domestic violence. It’s immigration reform. It’s the way that workers are being treated. All of these things are the same causes that are putting people on the street,” Friedman said. “So, it’s not enough to just offer them food or offer them health care.”

Murray also sees that the crisis is “intersectional” and stems far beyond housing.

However, she still believes that providing safe housing will help the homeless, both from a living and health perspective.

“[I] truly see housing…as a human right and housing as a form of healthcare, especially in the age of COVID. Now, truly understanding that if you were on the streets, you are that much more susceptible to a pandemic is huge,” Murray said.

Friedman also sees that the work she does for the organization in terms of service-providing has made a tangible difference in people’s lives, which brings her true joy.

“It’s just this perpetual spark of hope with each kid, with each person that gets off the street, whether they patched things up with their families and go back home or they get a job and get an apartment,” Friedman said. “On days where things are credibly frustrating and sad and you look around and say, ‘I can’t believe this is what [is] going on in society,’… there’s nothing that makes you feel better than that.”

Students can actively participate in helping the homeless by joining Urge to End. Click below to listen to club president senior Aghigh Banitaba discuss how to get involved in Urge to End and her goals for the club this year.