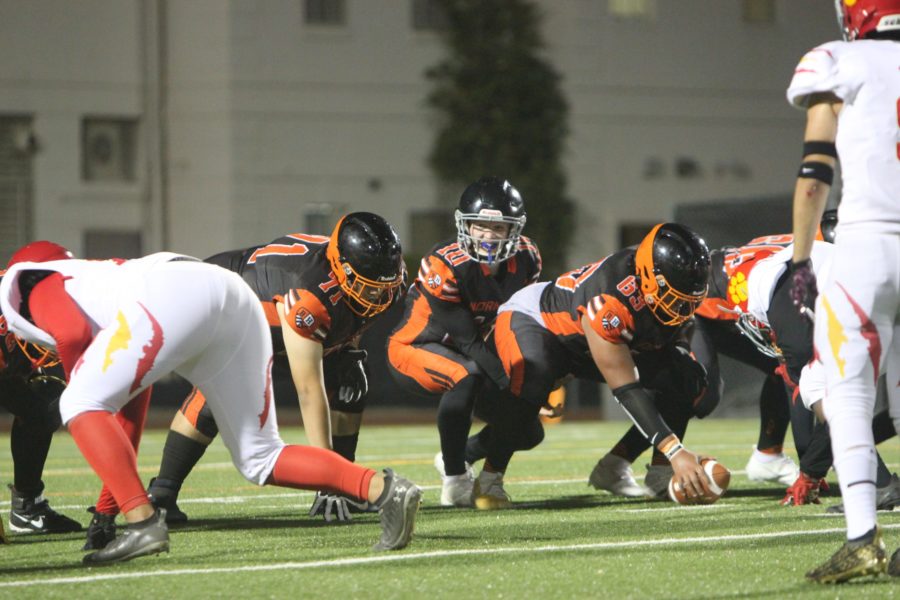 The Normans work together as they face the Hawthorne Cougars on Oct. 22. The homecoming game marked the last home game of the season. Photo by: Candice Anvari

During the homecoming game, the Normans lost to the Hawthorne Cougars with a final score of 43-8 on Oct. 22.

This was the last home game of the Norman’s season. The seniors celebrated their teammates during Senior Night before the game began. Once the game started, the Cougars quickly broke the deadlock and scored the first touchdown in the first quarter despite a solid defensive performance from the Normans. 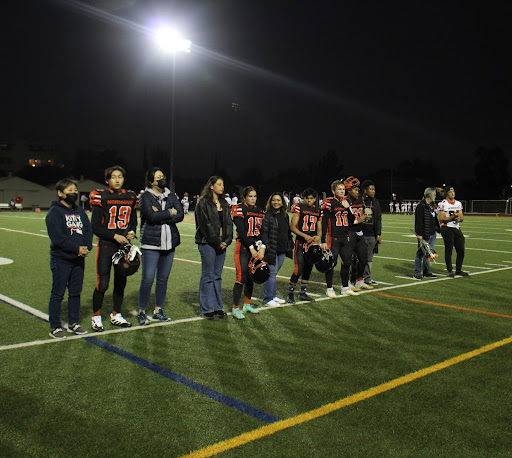 The seniors gather with their families and friends before the game. They also received flowers and posters from  from their younger teammates. Photo by: Ryo Miyake

The Normans looked to level the playing field, a chance that came during the second quarter when running back freshman Cameron Park ran a play that brought the Normans to the seven-yard line. Instead of throwing a pass, quarterback and captain senior Will Harris answered Park’s run by running the touchdown himself, bringing the score to 8-8 after a successful additional play. However, the Cougars scored two more touchdowns in the second quarter, making the score 20-8 by half-time.

While the Normans had a good first half, it was the second half that cost them their game, according to offensive and defensive lineman junior Francis Molina.

“That first half was one of our best. Unfortunately, we weren’t able to pull through in the third and fourth quarters, despite starting strong. I think a combination of injuries and discipline played a major role in the downfall in the second half,” Molina said. “We got unwanted and easy to prevent penalties and lost some vital players due to injury in the starting lineup like Damjan Mitrovic.”

Freshman Julien Medwin, also believed that the team fell short during the second half.

“The game started off well, and towards the second half we started to lose energy and intensity, and the game went downhill. While watching, especially with the injuries we went through, it started to feel like instead of trying to win, we were just trying to get out of the game without getting injured,” Medwin said. “At the end of the game, the seniors gave a little speech and told us how to learn from their mistakes and to build a foundation so we can succeed in the future.”

The Cougars scored 23 more points in the second half before the final whistle.

The game was a sad loss for the Normans because this was also the day of Senior Night. Many of the seniors, like middle linebacker senior Jonathan Esrael, were emotional and disappointed, but they also provided advice to the team after the game.

“We didn’t go hard enough and we didn’t do what we had to do. I want to see [the] guys winning more games next season and I hope [they] make the playoffs,” Esrael said.

Kicker and captain senior Mimi Kessler was also emotional and hopes that the team will do better next season.

“I love [the] guys so much, and this season was really amazing. It was a really great experience, and I’m glad I got to share it with all of you. I’m really happy that I got to spend these last couple of months with [the] guys. We’ll come back next year, and I can’t wait to see you guys improve so much and get a winning record,” Kessler said.

Linebacker and captain and senior Dan Menache, who was unable to play due to an injury, gave the team a message, as well as his hopes for the next season.

“When next year comes around, don’t make the same mistakes that we did. You’re gonna lay the foundation. Make sure you push your teammates, push your brothers because if you don’t push them, they’re not gonna push you and you’re gonna become weaker. I see a lot of potential in this team. You just got to push yourself,” Menache said.

The Normans look to win their last game of the season at an away game against the Centennial Huskies on Oct. 29.

Senior Johnathan Esrael prepares for the pep rally by hanging up the Senior Night posters, which included the seniors’ names and jersey numbers.

Senior Eli Ramer blows up the kiddie pool for the tug of war contest.

During the team’s dance with the cheerleaders, senior Andrew Villaflor smiles as his teammates lift him.

When Dance Company performed their half-time choreography, senior Lillia Maier showcases her skills, while also maintaining her energy throughout the dance.

Half of the Dance Company performers drop into a split during the pep rally. Among them, senior Daniella Spero grins as she showcases her middle split.