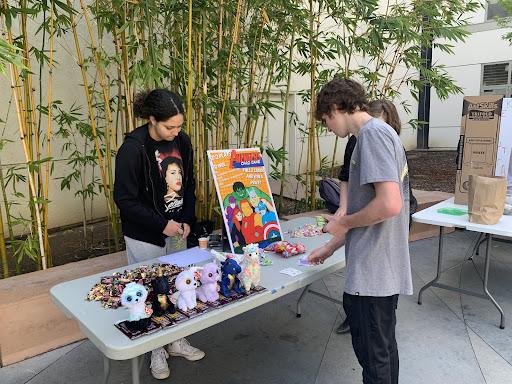 Senior Brianna Del Rio hands a student his prize for winning a game at the Probability Fair.

Students in the probability/statistics classes presented projects for the Probability Fair outside the Science Building from April 4 through April 6.

Students created games for the fair as a class project and gave out treats, which included candy, stuffed animals and chocolate as incentives for attendees to play. Students that were not a part of the class received game tickets from probability/statistics teacher Joshua Glass.

“The only qualifications are that it has to be a game of pure chance, so there’s no skill involved, and the probability has to be complicated enough that it fits the level of our class, so it’s not just picking a name out of a hat. It’s gotta be more complex than that,” Glass said.

Seniors Sienna Wolfe and Lucas Stimmel made a sports pyramid called “Championship Round” for the fair.

“Each sport was a different level made up of different teams, and there were six on the bottom, five on the top, and then it went up to three teams. There were Q tips behind  every sports team and behind the sports teams was a trophy,” Wolfe said. “Part of the game was to guess which team you thought had the trophy behind it, and you would guess at random, and if you’ve got it correct, you moved on to the next round to see if you can get to all five rounds, and each round had a different prize associated with it.”

Click on the video below to see how students engaged in the Probability Fair.

Seniors Naomi Mayzels and Taylor Fuchs incorporated music into their project because they felt as though it was a popular topic.

“It was regarding music and what me and my partner did is we made a poster with five artists on it, and we had the game players pick an artist, and then we had three different playlists. You win if you shuffle the playlist and if you land on the artist that you chose, you get a piece of candy,” Fuchs said.

Glass enjoyed hosting the fair, and he believes both his students and attendees did as well.

“The kids have been really prepared and had really, really great energy, which goes a long way in terms of making it exciting,” Glass said.

He especially enjoyed it because it was the first time he threw an in-person probability fair in two years.

“It seems to be going pretty good so far,” Glass said. “You can see some of the things that they built. They got pretty creative. I think everyone’s really excited to be able to be in person and have all this excitement again. I think we missed that.”

Click on the arrows below to view the students’ projects.

Senior Ramtin Abayahoudaian pops balloons to win a prize at the Pop For A Pop stand at the Probability Fair.

Seniors Talia Sarraf and Milo Lojdl present their Pop For A Pop project to attendees.

Seniors Abel Nguyen and Pema Benjamin reorganize their cups and tennis balls after students and staff play their game.

The security guards also attended the Probability Fair alongside students and engaged in the games.