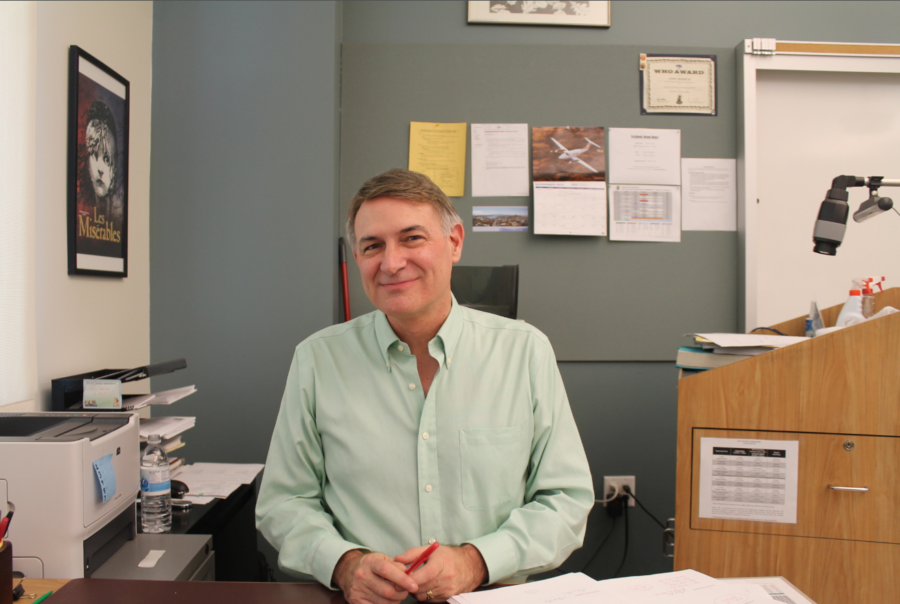 As seen in the Nov. 26 issue
Dani Klemes, web editor-in-chief
Hailing from Long Beach, Calif., math teacher John Borsum has his head in the books and his heart in the sky. Having earned his pilot’s license at age 50, Borsum balances his schedule between flying his instrument-rated airplane and traveling worldwide in his pursuit to gain a more cultured outlook of the world.
A SoCal native, Borsum attended Cal State Long Beach to earn his Bachelor’s degree in math, and went on to earn his Master’s degree in school management and administration at Pepperdine University. In addition, he has taken courses at USC, UCLA and the University of Redlands, and now teaches calculus at West Los Angeles College.
“I’ve always lived a fairly busy life, always teaching full-time and going to college classes or teaching at college,” Borsum said. “I’ve taught virtually all levels of math between high school and college.”
Though Borsum was interested in math at an early age, he developed a passion for airplanes as a teenager and decided to pursue his pilot’s license.
“When I was in high school I used to always go after school to Long Beach Airport and sit near the runways to watch the airplanes land and take off,” Borsum said. “I always thought it would be fun to be a pilot.”
After discovering his love for operating aircrafts, Borsum worked hard to turn his pilot dream into a reality.
“To be a pilot, you need time and money, so once I became an administrator here in the district, I’ve had a little more money and a little more time to take flying lessons,” Borsum said. “I’ve had my license for roughly eight years. I’m not the most advanced, but I’ve gone as far as I think I need to go.”
When Borsum is not behind the instrument panel in the cockpit, he likes taking the passenger seat. Having travelled to all 50 states and various continents, Borsum is an experienced flyer in more ways than one.
“I’ve learned to go to places that are not so much tourist places,” Borsum said. “I’ve been to Australia, the Middle East, the Scandinavian countries, Europe, the Caribbean, North and South Africa, and some countries in Central and South America. I’m lucky that I’ve been able to travel a lot.”
As well as enjoying the recreational aspect of traveling, Borsum believes that traveling promotes cultural awareness and exposes him to multiple aspects of life.
“I think [traveling is] important. It’s a good way to see what people are like around the world and it gives you a different perspective. I find that my friends who live in France, for example, have a very different outlook on life,” Borsum said. “Having time to spend with their family and friends is much more important to them than making money is, whereas, in the United States, success is equated with money.”
In addition, seeing the world gives Borsum the sentiment that he belongs to something on a much greater scale.
“Traveling makes me feel like I understand the people of the world much more because it’s very fulfilling. I feel like I’m a member of the larger global community rather than just my neighborhood,” Borsum said.
Borsum plans to continue his traveling excursions as he heads to Puerto Vallarta for two weeks over winter break. As for his future in teaching, he is nearing his final destination.
“I won’t teach math forever; I’ll probably retire within the next couple of years,” Borsum said. “After I retire there are several things I might be a little more involved with. I definitely want to travel more and get more rest. I haven’t been flying a lot lately because I’ve been too busy grading papers.”